Entertainers and their rides 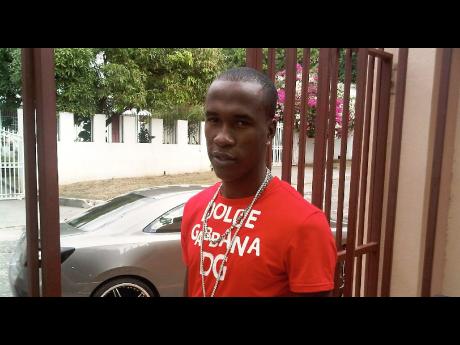 DJ Laden with his Honda in the background.

Jamaican entertainers may not blow as much money on flashy luxury vehicles as most overseas entertainers do; or rather, nothing remotely close to the price of a Bugatti Veyon, that values US$1 million. Nonetheless, whenever they cruise by, we tend to gaze agape towards the direction in which the vehicle swiftly went. Whether it is the impeccable chrome finish and design of the rims, the immaculate paint job, or just the model vehicle, in most cases these rides tend to effectuate envy.

Popular dancehall artiste Marlon Plunkett, more widely known as Kiprich, said he has been an ardent car lover since he was a young boy, and it is this admiration that has driven him to become the owner of numerous vehicles.

"Mi jus' love car from mi did small an did have dem toy car deh a play wid," said Kiprich. "The reason mi have more dan one car is because more time mi a drive, an mi si a car weh mi jus like di vibes of, suh mi get it."

Entertainers thrive on being unique, therefore, we seldomly find them with vehicles that haven't been modified. And this is exactly the case with Kiprich's '07 Chrysler 300, that 'rolls' on 22-inch chrome rims, while sporting a custom Bentley grill, chrome trimmings, and HID lights.

"Di car weh me drive nuh common. Di first time mi drive a Chrsyler mi did deh abroad and mi did like it. It was very comfortable and mi like di way it tek di corner dem," he said.

Kiprich told Automotives that the Chrysler is his 'official' vehicle but whenever he is going on long journeys to the country for a show, he drives his '08 Chevrolet Tahoe truck that he believes can manage the rough terrain a lot better.

"Di truck can handle the pothole dem better, an' it have a lot more space. As an artiste it's good to have big vehicles, like di Chrysler, because it is good for safety. Yuh si wid dah car yah now, if mi crash, it can tek off some a di impact," Kiprich said.

Unlike Kiprich, dancehall artiste Macka Diamond, born Charmaine Munroe, is not a car fanatic, but admits that she enjoys driving her black '01 Lexus Harrier. She revealed that her decision to purchase the vehicle came on the heels of the success of her single, Lexus and Benz.

"Because of the song I saw it fitting to buy a Lexus," Macka Diamond said. "I am more of a property person, so I have only one car which is my Lexus, and it's for sale right now because I am thinking about buying a Dodge."

As the economic crisis lingers, more individuals are opting to make only financially prudent purchases. Macka Diamond is no different.

"I like to have things of value that won't depreciate easily, like a vehicle with affordable parts and one that doesn't use too much gas,"she said.

Another entertainer, Okeefe Aarons, known as Laden, who is best known for his hit single Time to Shine, shares the same sentiments. He said he looks for affordability when purchasing a vehicle.

"It nuh matta if it is a brand new car, if it used or if it did ship come a Jamaica wreck and den fix up, because, mi nuh too fussy over dat. I drive a '06 grey Honda Civic," he said. "And it is affordable for me and I can maintain it at this moment."

Laden's Civic boasts a modified sound system for added power, 20- inch chrome-finished rims and a customised brake light that is black/ white instead of the usual red. He also owns a black Yamaha R6.

"I feel more comfortable as an artiste since I bought my own vehicle and my car fits me," Laden said. "I change my rims like how I change my shoes. When I am going on long journeys I put on the Honda stock rims and when mi a hol' a vibe inna di area, mi drop on mi 20-inch rims."

As to whether the type of vehicle an artiste drives affects his or her career, the answer seems to be yes as, in our culture, it tends to reflect status and worth.

"It generates a lot more respect for you on the road and it makes the fans feel that something a gwaan fi yuh. Di fans nuh waan si dem artiste a move like seh nutten nah gwaan. Just like money, when yuh have it, it mek people gravitate towards yuh and it creates a positive hype for your career," Kiprich said.