According to Sonny's plan 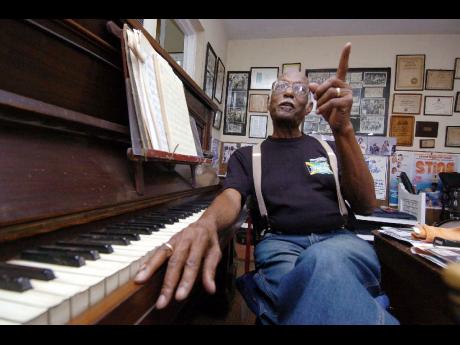 Myrna Hague said that every time a staging of the Jamaica Ocho Rios International Jazz Festival ended, her husband Cecil 'Sonny' Bradshaw would start planning for the next one. So he already had a plan in place for the landmark 20th staging when he had a stroke while in England on October 10 last year. "The 20th staging was going to be special and he wanted specific things done," Hague said.

And she told The Sunday Gleaner that "I am sticking to it as closely as possible" when the festival runs from June 12-20.

A major part of that plan is honouring the musicians who were part of the indigenous movement in Jamaican theatre, especially the National Pantomime, Hague pointing out that Bradshaw was part of the changes as well. "In our culture, we recognise singers a lot, but not the players of instruments," she said. That will be done at the concert and awards ceremony, slated for the Sunset Jamaica Grande, Ocho Rios, St Ann, on the festival's penultimate day. The week of jazz closes on Father's Day, as is customary, the final event to be held at Turtle River Park, also in Ocho Rios.

The first event is a jazz, wine and fashion event at the French ambassador's home, which doubles as a fund-raiser for the Consie Walters cancer hospice and will feature Cuban singer Kiralina. The following day, Carmen Lundy will be the special guest at Jazz in the Gardens at The Jamaica Pegasus hotel, New Kingston. With jam sessions at Hotel Four Seasons in St Andrew and the Sunset Jamaica Grande (the latter dubbed the official festival village), as well as free public concerts at 4 p.m. daily at the Ocean Village Centre, Ocho Rios, it is a full, accessible schedule. The Jamaica Big Band, saxophonist Pamela Williams and pianist Randy Weston will be performing at the festival.

Added to the Ocho Rios and Kingston events are satellite events in Negril, Westmoreland, and Port Antonio, Portland.

The 20th staging apart, Bradshaw had a strict jazz rule that Hague said would not be broken. "He insisted that the festival remain a jazz festival and he was not prepared to join the pop music. Not that he did not love pop music - he loved reggae, he was an experimenter, but he felt there was a successful event in January, so it was OK to have a jazz festival in June. He stuck to his guns and I am sticking to it with him," she said.

She added, "I am a jazz person too. I was not participating in the process just because he was my husband. I agreed with the process and would probably be participating with him just the same," Hague said that while there are many events and festivals for various genres of music "we have this one jazz festival. It is the only one in the Caribbean. All the others have gone over to R&B and pop music. There is room for it and it has an audience. We can grow the audience by getting to them. I know a lot of young people who love jazz, but are afraid their friends would laugh at them".

"You do what you like and you do it with conviction," Hague said about staging the Jamaica Ocho Rios International Jazz Festival.

Sponsorship is "not great, but not bad", not much in cash but certainly in kind, with an airline sponsor, hotel, advertising and product sponsors giving their support. "We are working towards a good situation. It is looking good from where I am sitting at the moment," Hague said.