I need to do this for Sonny - Hague 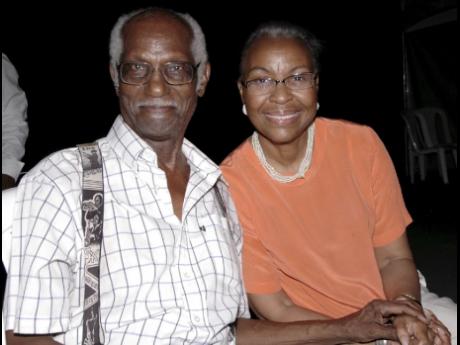 The 20th Jamaica Ocho Rios International Jazz Festival is being staged by the Sonny Bradshaw Foundation, Myrna Hague being one of three directors, as its major fund-raising event. The intention is to raise money to support young musicians, preferably trumpeters, who are serious about their craft. Both the foundation and the 2010 staging of the festival will be launched on April 28.

The foundation will also be publishing Bradshaw's autobiography, as well as digitalise and archive his arrangements and publish scores in book form.

It is a support for not only the festival but Bradshaw's work in a long music career and Hague told The Sunday Gleaner that "there was only a moment when I wondered if I myself would have the strength. But I found that people were very supportive and my committee members stood at my side".

She said that when her husband fell ill, they were planning the 2010 festival and "I felt sure he would be OK. His death was not expected. A lot of plans were made around him and his being well. We felt he would be around to pick up the pieces. When he died I was in shock".

Then there were the memorial services to deal with, one in London and another in Jamaica on November 9. After that second service, "I was not busy any more. I was not running around organising things. I had this emptiness in front of me". So, Hague said, "For the next week or two I was weeping a lot and thinking, 'I can't do this'. By December got around and I got through Christmas, I was thinking, 'I need to do this for him'. By January I was good."

"Friends and family and the jazz community rallied around and gave me the courage," Hague added.

She remembers the first Jamaica Ocho Rios International Jazz Festival clearly and said the then one-day event at the Carib Ocho Rios was "a huge success. It was a marvellous day. It was entirely Jamaican, just all the young Jamaican jazz musicians at the time".

"The next year we went to three days. We picked Father's Day because there was nothing for Father's Day. Everything was for mothers. We established the Father's Day tradition," she said. So before the closing Sunday concert, there was the Saturday concert and awards after the opening Friday blues night.

"By the third year, we went for one whole week. Then we established what we called a jazz vacation," Hague said. The concept was selling the event to the tourist market, having events in the hotels and doing gigs in Montego Bay, Runaway Bay and Kingston for 'The Complete Jazz Vacation'. And, she said, "It worked for a long time."

Then other persons saw that it was working and "the competition was so stiff. Our tourism organisations never really got behind us to a great degree". The St Lucia Jazz Festival got strong support and started siphoning off the crowd. And there was never the temptation for the Jamaica Ocho Rios International Jazz Festival to go pop. "We never felt that was the truth of the situation. People go to what they want," Hague said, adding that in her experience even people who like pop and jazz do not wish to hear pop at a jazz event.

And as soon as the 20th staging of the Jamaica Ocho Rios International Jazz Festival ends on Father's Day, June 20, just as Sonny Bradshaw would have done, planning for number 21 will begin.