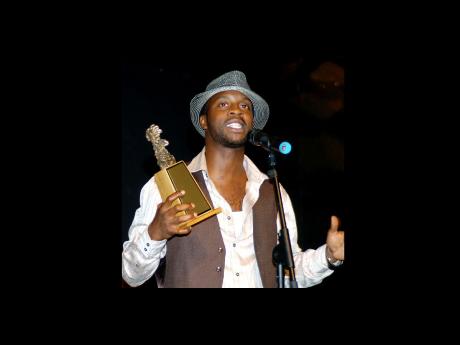 Christopher 'Johnny' Daley gives his acceptance speech after being announced as the Best Actor at the 20th staging of the Actor Boy Awards. - Winston Sill/Freelance Photographer

The Best Actor in a Lead Role and Best Actress in a Lead Role categories were in the final set to be announced at the 20th Actor Boy Awards, held in late March at the Courtleigh Auditorium, New Kingston. By then, For Better or Worse, the Basil Dawkins production in which Christopher Daley was nominated for Best Actor, was already well on its way to an impressive haul - a sweep, in fact - taking the awards for Best Drama and Best New Play.

Daley was not, however, taking that as a portent of personal 'winnings' to come. Nor was he impatient for the individual recognition. "Us getting the awards before, I felt good for the team. It was a team effort. I went up onstage even before I collected my personal award. I was prepared to enjoy the team effort. It was a family affair," he said.

So he did not have a speech prepared, tucked away in a pocket, ready to be hauled out at the appropriate moment.

"Before I got there I had decided if I did not win, it would be OK. The other people nominated in the category (Alwyn Scott, Clive Duncan, Donald Anderson, Glen Campbell) are people I have great respect for," he said. Plus, without seeing the productions they were in, he could not make a personal assessment, so he was just happy to be in good company.

But he was obviously ecstatic to get the judges' nod for his performance as Alfred, a man who temporarily loses his partner and children to a wealthy lesbian but finds his footing personally and professionally, much of that through the advice of Actor Boy Best Actress in a Supporting Role winner, Teri Salmon, who urges him to "rise above".

Daley had done some urging of his own. He unabashedly tells The Sunday Gleaner that "I had been prodding Basil for years, 'You need to give me a role'". This was because Dawkins was one of the persons taking the dramatic route. Then, "when Basil called me and I read the script I said, 'Thank you'".

He was grateful on different levels. Daleysaid, "The role came at a right time and the message of the production came to me personally at the right time." So, in accepting the award, "I thanked my significant other because it is important that you give thanks for the time away", that comes with the heavy schedule of rehearsals and performances.

And those rehearsals were key to the synergy off and onstage in For Better or Worse. Daley credits Dawkins' system, a style of production in which much of the rehearsal is done at his home. "It is a family thing. You feel a part of the family," Daley said. Then, "when you are onstage, you are with someone who you know. They are not going to throw something at you you're not going to expect, so you can work hard at delivering your role to the people".

His role as Alfred is very different from the comedic fare that many would be used to, not only from acting but also Daley's stand-up comedy forays. He did not fear not fulfilling expectations of laughter, as "the way the show was being presented, people would understand if they took time to read or look. It was publicised on TV that it would be a dramatic role".

Conversely, he said "the fear was mine. I knew personally the producer got feedback from people asking if he was sure I was right for the role". But, he told The Sunday Gleaner, "I knew from I read the script that this was the right role - what was needed. Douglas Prout (who took Best Director) and I worked tirelessly on the rhythm that I moved in".

Daley said he wanted more than ever for the show to open. For not only can he provoke laughter, but "I can make you cry too, I can make you feel too. And that, I think, is the job of the actor".