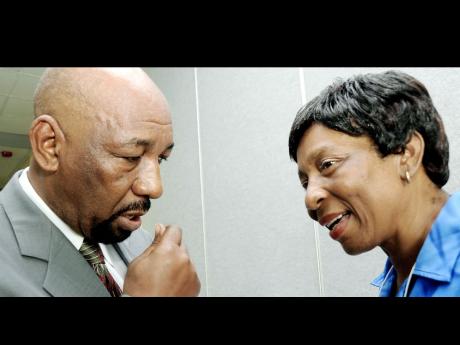 The escalating and widening crisis over the 'Dudus' extradition issue; the intrigue, mystery, widespread suspicions and 'suss' over the Manatt, Phelps and Phillips imbroglio; the corruption charges against Joseph Hibbert and Kern Spencer of our two main political parties; our galloping and stunning murder rate now graphically highlighted on the front page of The Gleaner; the worsening industrial relations climate between the Government and its teachers, nurses and policemen and women; the continued coarsening of sensibilities and our frighteningly low levels of social capital provide evidence of this pervasive social crisis.

The Gleaner has provided commendable public service by opening up its editorial pages to academics from the University of the West Indies (UWI) to bring scholarship and research to its readers. On Wednesday, the polling director for the Centre for Leadership and Governance, Lawrence Alfred Powell, disclosed some disconcerting data about the levels of trust in the Jamaican society in an article titled 'Are we Experiencing an Epidemic of Distrust?'. The figures were alarming: In three successive surveys between 2006-2008, it was found that between 83 and 84 per cent of Jamaicans don't trust other people. Those agreeing that "most people can be trusted to keep their promises" were a small minority averaging 14 per cent over three years.

The implications of this were made clear by Powell: "Trust is the glue that holds a society together. The efficiency and indeed survival of individuals and groups within the society depends heavily on the presence of such trust. It is essential to modernisation, to the development process and achieving sustained economic growth." Of course, those who have been reading me over the years will know the emphasis I have put on trust and other elements of social capital, swimming against the narrow economistic tide generated by both Marxian and capitalist forces.

The level of humanity's productive forces does have a significant bearing on moral and social development; and our material base is highly influential vis-à-vis our superstructure. But the superstructure of values and attitudes also has an impact and a dynamic interplay with the material base. The fact that Barbados, when it faced its economic crisis some decades ago, managed to bring the various interest groups together and workers agreed to hold strain in terms of their demands while the private sector held strain on prices and Government adopted fiscally responsible policies, shows what social partnership can do. We have not been able to get a social partnership agreement going despite many years of trying.

To hear Pearnel Charles, Ruddy Spencer, Andrew Holness, Arthur Williams and Audley Shaw make the case for Government's inability to meet its commitment to public-sector workers is to see the logic of their argument, but this logic is not enough to get through to the groups who need to understand. People don't trust Government spokespersons and are not in a mood to "understand". I heard Pearnel Charles last week on Nationwide at Five calling on God, the Lord, Jesus Christ and Jesus in his desperate attempt to get disgruntled and militant public-sector workers to understand that "The money nuh di deh".

But these worker representatives don't trust the Government and they don't believe the Government can't do better. They believe they can find the money despite their protests to the contrary. Charles is pleading with workers to be "reasonable", to understand, but in a context where there is no trust, what is "reasonable" to you is utterly unreasonable to me. There is no shared public reason. Ask Edith Allwood-Anderson whether she does not believe the nurses are being victimised because it is perceived that she was rude to the prime minister!

Economic arguments, appeals to logic and reason have limited power in a context of appallingly low levels of trust. Lawrence Powell puts it well in that Gleaner opinion page article: "If this (lack of trust) were an ailment related to physical health, rather than social health, it would be considered an epidemic. Any time a contagion spreads to 80-plus per cent of the population, it begs to be taken seriously - if not as a social illness per se, at least as a symptom that the social fabric is beginning to unravel in significant ways."

Dr Powell reveals that the widespread distrust in society significantly affects perceptions of corruption. While only about 25 per cent of those interviewed said that they had actually witnessed acts of corruption, an overwhelming 96 per cent said they believe corruption was 'common' in Jamaica. Powell's empirically rich piece - a welcome and refreshing difference to the merely opinionated journalism which prevails - shows that Jamaica's trust deficit is among the worst in the world. There are countries which are economically poorer than us which have higher trust levels, in other words, economic determinists. Powell says Jamaica is within the lowest cluster of countries "where the sense of distrust substantially overpowers trust - with the result that social cohesion and social capital building become more difficult".

We are at the bottom of the world's trust levels, sharing company with countries such as Burkina Faso, Serbia, Morocco, Colombia and Iran. Powell makes the logical conclusion that this enormous trust deficit is "likely to present serious impediments to civil society and development efforts in coming years. This, in turn, suggests a need for national strategies that focus more intensively on building social capital within communities as a precondition to any sustained economic development, violent-crime reduction, etc."

Powell has hit the nail on the head and I hope - I really do hope - that the prime minister has taken note and will give every indication of that in his Budget speech shortly. He cannot short-shrift these fundamental issues, focusing narrowly on the economic or social welfare issues.

The prime minister cannot afford to give a journeyman speech this year. He can't squander this grand opportunity with an uninspiring, lacklustre performance. His overarching aim must be to inspire, to resuscitate hope and optimism, to convince, to convict and to coalesce. Increasingly, the prime minister's critics are charging him with arrogance. He needs to effectively rebut that branding and to display the skill to be both commanding and humble in presentation.

When the prime minister speaks, his tasks will be largely twofold: He must cogently, decisively and powerfully demonstrate that the IMF-path that his Government has chosen is the only practicable way forward; that the PNP has no alternative to it and that it has the elements which will lay the foundation for economic growth and social cohesion. For him to have impact he must do this in a way which appeals not just to partisans: It must be clear to reasonable, clear-thinking people that he has a profound grasp of the facts and the issues.

And he must, more important, deliver a speech which will pull the country together; a speech that builds bridges to the Opposition and other social forces; a speech that takes the high ground, one that is statesmanlike; one which demonstrates humility and which charts a vision for the nation. A speech merely trotting out projects, programmes and promises will fall flat, prime minister. Don't succumb to that.

The country cries out for inspiring, galvanising, engaging and invigorating leadership. Credibility and confidence are big issues.

Dudus has not been extradited, but trust has. The prime minister's challenge in his Budget speech is to bring that trust back home. The court of public opinion has already decided that trust should be tried here.

Ian Boyne is a veteran journalist who may be reached at ianboyne1@yahoo.com. Feedback may also be sent to columns@gleanerjm.com.