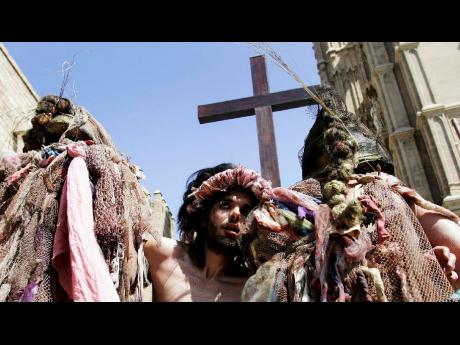 Actors from 'Taula Rodona' take part in a 'Via Crucis' procession during Holy Week in Palma de Mallorca in the Spanish island of Mallorca April 6, 2007. Hundreds of Easter processions take place throughout Spain during Holy Week around the clock, drawing thousands of visitors.

Permit me please the privilege of responding to your columnist Ian Boyne who, annually it seems, finds it opportune to assail Easter from a peculiar perspective.

On what is known as Easter Sunday in the Church's calendar, he devoted 1,500 words to do so again, using as a launching pad just over 100 words he quoted from a letter sent him by Dr Lucien Jones.

Easter, of course, for many people, is an emotional subject. Therefore, and perhaps particularly so for myself, as well as for Mr Boyne, but for different reasons, which are nevertheless pertinent to perspectives shared. When I wrote a religious column for The Sunday Gleaner some years ago I even in one column focused on Mr Boyne as a prominent leader of a religious group I regarded as more cultic than orthodox.

Of course, he has omitted his religious background but I feel compelled by intellectual honesty to state mine as I set out to respond to his views expressed in attacking Easter. Therefore, in all fairness to such debate, I declare my alliance with historic creedal Christian orthodoxy and in particular evangelicalism.

Second, I shall avoid the anti-Semitic snare he has used to background his arguments for I am convinced that if I did so the essence of the issue would be missed, which is the most profound reason for the Church's celebration of Christ as part of what is traditionally known as Easter. This essence is the saving work and glorious resurrection of Christ on behalf of all Jews and Gentiles.

Third, in my orientation to stick to the essence of the issue, I shall avoid his embellishments of certain selective historical references and accretions and traditions associated with Easter. Boyne concedes the lesser importance of such observations when he says: "But quite apart from these historical associations with Easter, there are more fundamental and disturbing questions about the Easter story."

Therefore, I shall follow his lead to the "more fundamental and disturbing", and to which I am even tempted to add, even 'damming', bordering on the heretical blasphemous, which Boyne identifies to be the seeming failure of God to be wise. From Boyne's perspective, given with thin intellectual masking, he says, as he proceeds to state what he identifies as "a major objection lodged by atheists and agnostics against Evangelical Christianity".

This is how Boyne frames the argument devised by the wise of the world against God:

"If Jesus came to die for the sins of the whole world, why have there been so many people who have never heard about Him and His plan?" In other words, if God devised a plan to redeem mankind from sin, why does He seem to be so inefficient in getting that message to everyone?

But inadvertently Boyne has answered his own concern. Put simply, God's plan seems to be defective because of the likes of Ian Boyne, who has heard the gospel, as his writings attests, but given an opportunity to present the gospel, he defeats himself in arguments more filled with what may at best be termed pseudo-intellectualism, for his work ignores the very facts of gospel Dr Lucien Jones was gently prodding him to recognise. Simply multiply the likes of Boyne and the answer to his own puzzle is solved.

Boyne's penchant for quoting heretics, agnostics and cynics of the Christian message the Bible proclaims is impressive for a show of knowledge, yet one that fails to deal with the highest source for quoted relevance to a discussion challenging God's wisdom for planning and God's effectiveness for implementing.

Let me illustrate this point of historical relevance and source integrity. History is always instructive, but history also has a future called prophecy. In prophetic history God wins. The apostle John in the last book of the Bible has provided an answer to what puzzles thinkers such as Boyne, relying more on the past and the present of history but ignoring the future of history.

Listen to what John, the last surviving apostle describes prophetically in the last book of the Bible, Revelation. John writes his vision in which he sees and hears a vast multitudinous gathering of resurrected and gloriously transformed human beings - the redeemed people because the central and essential events the Christian celebration of Easter is about - accomplishments of Christ - gathered around Jesus in heaven. John identifies the people of his vision racially and ethnically and universally.

John is describing the outworking and God's wise and effective plan for sinful, lost humanity - successfully gathered heavenly people comprised of representatives "from every tribe and language and people and nation" (Revelation 5: 9).

In effect, then, future history proves the answers to the falsely conceived logic of cynics. John describes the fruit of Easter remembrance and proclamation of the gospel by Christians constrained of the Holy Spirit to spread news of the greatest historical event, which is the resurrection of Jesus from the dead.

Everything that Dr Lucien Jones said is correct, for none of the issues Boyne could have touched would supersede the events central to the Easter message. Boyne missed the opportunity to score with the greatest event any journalist could report on. As Dr Jones invited, the challenge remains Ian, "It's now time to journey with Christ, the saviour of the world ..."

Billy Hall is a veteran journalist. Feedback may be sent to billsophia@hotmail.com.