Manatt Mystery, It's a conspiracy! 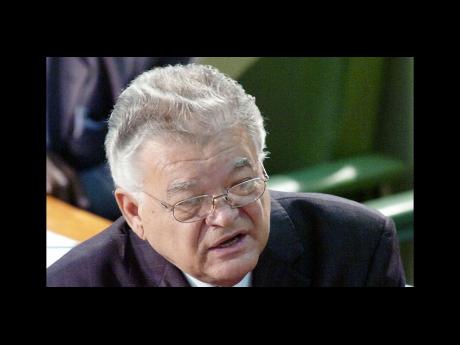 MINISTER OF Industry and Commerce Karl Samuda yesterday stopped short of accusing the parliamentary opposition and the Jamaica Chamber of Commerce (JCC) of conspiring against the Government.

In an interview with The Sunday Gleaner, Samuda hit back at the two organisations which have taken the Government to task for mandating him to spearhead the probe into the controversy involving attorney Harold Brady and the United States-based law firm Manatt, Phelps and Phillips.

Samuda declared that it was "quite interesting that the JCC and opposition leader came out with the same statement at the same time".

"I find the coincidence in the statement by the Chamber and Mrs Simpson Miller to be very interesting," he told The Sunday Gleaner in his first comments since being given the responsibility to tidy up the mess.

But the senior government minister, who also serves as general secretary of the governing Jamaica Labour Party (JLP), would not say whether he suspected collusion between the People's National Party (PNP) and the JCC.

"That level of coincidence I find very interesting," insisted Samuda. "It is really hard not to find it interesting - to arrive at the same conclusions at the same time."

Would shed no more light

However, he declined to shed more light on why he placed so much significance on what he has described as the simultaneous delivery of the statements from the parliamentary opposition and the JCC.

In her statement, Simpson Miller called on Prime Minister Bruce Golding to revisit his decision.

She suggested that Golding must order an independent examination of "this contentious matter" and make the findings public.

The statement from the JCC read in part: "It is not clear what are Minister Samuda's terms of reference, but it seems to us that in the wake of the controversy regarding the Manatt, Phelps and Phillips affair - which appears to have spiralled further in the face of comments reportedly made by attorney Harold Brady in an April 8 radio interview - the matter has now reached the stage where it warrants independent investigation."

The matter was abruptly taken out of the hands of Information Minister Daryl Vaz following heated public exchanges with Brady late last week and placed under Samuda's responsibility.

Samuda also declined to outline his terms of reference when pressed by The Sunday Gleaner. "I am not going to comment on either the process or progress being made on what we are engaged in at this time," he asserted.

Simpson Miller said Golding must do the right thing and order a comprehensive and transparent independent examination of the Manatt, Phelps and Phillips issue.

She contended that this issue has been plagued by far too many claims and counterclaims from the prime minister, the minister of information, the solicitor general, Harold Brady, Manatt, Phelps and Phillips, and now the JLP, which has been introduced as party to this debacle. "A speedy, clean and clear resolution is now required," she stressed.

Simpson Miller said it was apparent from this development in the Manatt, Phelps and Phillips affair that there is considerable confusion in the minds of members of the Government about their party's political interests, affiliation and loyalty, and their public duties.

"Given this level of confusion in the minds of the members of the Government and the continued failure of the prime minister and Government to provide the necessary answers to the numerous questions posed, an unimpeded, independent examination must now take place."

Simpson Miller said the prime minister must also be advised that referring this matter to the general secretary of the JLP would only add to the confusion.

Like Simpson Miller, the JCC argued that the Government should deal with the matter in a manner which removes the Government from the centre of the controversy and which allows the findings to be regarded as credible.

The JCC emphasised that this must be done expeditiously, as the Manatt, Phelps and Phillips affair has become a matter of real concern for the Government, the business sector and the nation as a whole.

Failing an independent investigation, the JCC urges that, at the very least, Jamaica be given the benefit of a statement to Parliament by Golding.

This is intended to answer the many questions which have been raised and to bring some clarity to a situation which has been the subject of several conflicting reports, claims and counterclaims.