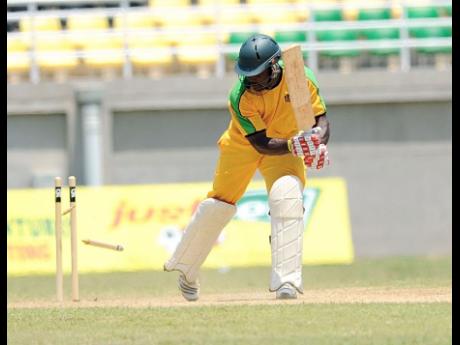 Jamaica's Danza Hyatt is bowled for 18 as the host team went down by seven runs to Ireland in the Supreme Ventures Sports Betting Jamaica Cricket Festival at the Trelawny stadium yesterday. - Ian Allen/Photographer

Narsingh Deonarine was the main architect as the West Indies turned back Canada by 49 runs while Jamaica suffered a mild surprise, losing to Ireland by seven runs in the Supreme Ventures Sports Betting Jamaica Cricket Festival at the Trelawny stadium yesterday,

In the feature game of the double-header, the West Indies posted an uncomfortable 130-7 in their 20-over allotment with Deonarine top-scoring with an eye-catching knock of 40, which came off just 23 balls. Deonarine launched two sixes and an equal number of fours in his impressive knock, which came at a point when the Windies were in a spot of bother on 4-63.

Wicketkeeper André Fletcher was also in a fiery mood, slamming three fours for his 32-run innings, which came off 33 balls.

Canada's Rizwan Cheema was the pick of the bowlers, bagging 3-19 off four overs, while Hiral Patel contributed 2-11 off two overs with Umar Bhatti closing on 2-28 (four overs).

In their reply, Canada stuttered to 81 all out in 19.2 overs, losing their last six wickets for 16 runs. Captain Ashish Bagai once again provided the runs for the Canadians, with 32 runs. Trevin Bastiampillai also offered support with 24 runs of his own.

Bowling for the West Indies, Deonarine took four for 14, Lionel Baker two for nine and David Bernard Jr, one for 16.

West Indies coach Ottis Gibson was pleased with the result.

"Today was really about some practice, it's good obviously to win and I believe the players did well today after a little layoff since the Zimbabwe series," said Baker. "It's good to see players like Deonarine doing well and to see Baker back and looking in good form."

Canada's Pububu Dassanayake bemoaned his team's lack of form at the top of the order and conceded that he was concerned with what he had seen so far.

"The guys bowled well, even if we gave up a little bit of extra runs, but we didn't bat well, and the top order didn't show up again. The top order is not clicking, so we have some concerns but they are all youngsters, so hopefully we can correct that," Dassanayake said.

In the earlier game, Jamaica turned in another unconvincing run chase, falling this time to Ireland by seven runs.

In what could be considered a mild upset considering the locals' unbeaten stretch throughout the four-team tournament, Ireland demonstrated impressive tenacity and discipline as they restricted the Jamaicans to 120-9 at the end of 20 overs in defence of their modest 127 all out in 19.1 overs.

Odean Brown, with a run-a-ball 20 which featured a six, was the top scorer for Jamaica.

After winning the toss, Irish captain William Porterfield decided to bat first and would not have been pleased with their start as they were struggling at 4-49 at one point.

However, the team managed to recover with Gary Wilson (22) and Paul Stirling (18) getting the most runs for the visitors.

Jamaica's coach Junior Bennett blamed the team's approach to the target for the loss.

"Our top half (batting) didn't do too well. The wicket was a slow wicket, so if we were rotating (the strike) a little earlier in the innings we would have got those runs," said Bennett.

Ireland's Phil Simmons welcomed the victory as he continues his team's preparation ahead of the ICC World Twenty20 championship, which starts in the region on April 30.

"We didn't bat too well, but we showed in the field that we can come out and fight hard, and at the end of the day, we came out on top. It's the start of the Twenty20 and it's good to start with a win," said Simmonds.

The West Indies team headed to the gym as they prepared for today's Twenty20 clash with Ireland at the same venue in the late game.

Jamaica will seek a better result when they oppose Canada in the curtain-raiser.