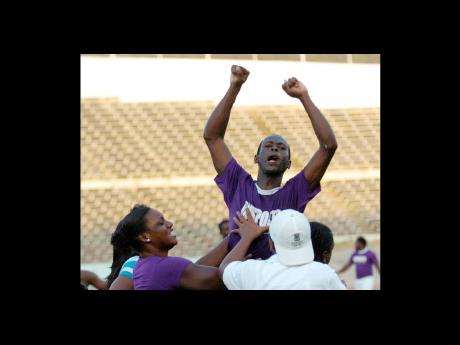 Norval Forrester of champions Claremont celebrates with fans after scoring the winning goal in a 1-0 victory for his team against Caribbean Strikers in the final of the Insport Community football championships at the National Stadium yesterday. - Ricardo Makyn/Staff Photographer

Claremont of Hanover captured the Institute of Sports All-Island Community football championships following a 1-0 victory over Caribbean Strikers of Kingston at the National Stadium yesterday.

Norval Forrester scored the lone goal for the winners in the 59th minute. Leroy Spence, coach of Claremont, said he was delighted with his team's performance.

"This victory means a lot to us," said an elated Spence. "From day one, we knew that this championships is ours and we were very confident that we would have won it today."

Spence added: "We created a lot of chances in the first half, but my players didn't put them away and at the start of the second half, I told them to just keep their composure and goals will come and they did this and we won the game."

Tulloch added: "I think that this has been a very good season for us because we did not expect to reach this far in the competition and so I must commend my players."

The champions collected their winning trophy and $500,000 while Caribbean Strikers took home the second-place trophy and $150,000.

Winchester of St Thomas won the third-place trophy and $100,000 when they defeated New Green of Manchester 4-1. New Green took $50,000 for placing fourth in the competition.

In the final, the first half was evenly contested with both teams missing clear-cut chances. Alwayne Williams, Forrester and Rohan Wallace missed for Claremont while Dwayne Gordon, Marvin Moore and Christopher Mason squandered easy chances for Caribbean Strikers.

However, Forrester scored the winning goal for his team nine minutes into the second half when he fired home a cross from Everton Palmer past custodian Horace Fairclough.

Caribbean Strikers Patrick Hall came close to giving his team the equaliser five minutes later when his 25-yard free kick hit the crossbar. Moments later, Ryan Cunningham should have doubled the champions lead but his clear header went wide of the target.