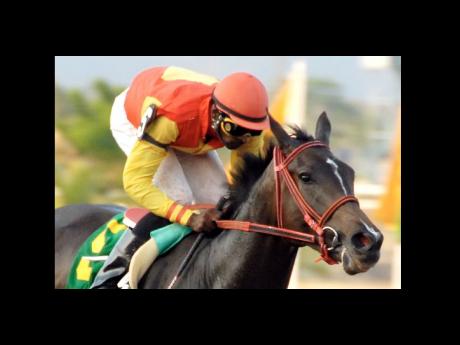 The dominance of the foreign horses from the stables of champion trainer Wayne DaCosta continued at Caymanas Park yesterday when the American 3-y-o filly FLUFFY went wire to wire in the Calvin O'Sullivan Memorial Cup feature for overnight allowance horses.

One of three winners for champion jockey Omar Walker, FLUFFY won by 8 3/4 lengths from the 5-2 second favourite GO MY ROBIN, ridden by the improving female apprentice Georgina Sergeon, with third going to PRIME MINISTER at 5-1. MY SPACE and ARIANA (both lame) were declared late non-starters, reducing the field to 10.

GO MY ROBIN, who is usually tailed off in his races, was not too far behind on this occasion as FLUFFY led from IVAN THE TERRIBLE, TOBAGO and the well-backed SPACEMAN. But when Walker asked FLUFFY to steal away from IVAN THE TERRIBLE at the half mile, it was a question of who would be second.

GO MY ROBIN, who turned for home in second position, stayed on well under the light impost to hold that position safe.

FLUFFY has now won four races from six starts. Since the start of the season, DaCosta has been doing remarkably well with his imported horses.

Both CASSANOVA BOY and DOUBLE THE HONEY are out not only unbeaten but have been winning in fast times and are arguably, or potentially, the two best horses in the country at present. FLUFFY has some catching up to do, but she has tremendous scope.

Later in the afternoon, DaCosta's useful American 4-y-o gelding NEW KINGSTON (Walker up) had to settle for third behind the vastly improved 4-y-o filly BRASH & SASSY in the 3-y-o and up open allowance race over the straight five course.

Toting a mere 48.0kg with lightweight jockey Peter Bryan aboard, BRASH & SASSY broke well from the number-four post position and proceeded to lead in mid-track, a length clear of 6-5 favourite FOREVER MINE with NEW KINGSTON (3-2) outpaced on the far side in the seven-strong field.

But as the race progressed, BRASH & SASSY was simply too light to lose. After leading in fast splits (22.2, 45.1), she kept on strongly under the right hand stick leaving the furlong pole to win by two lengths from FOREVER MINE and NEW KINGSTON, heads on, covering the distance in smart time of 58.3.

Owned by Good Heart, the chestnut filly by Burning Marque out of Nuttin But Red has won six races from only 12 career starts and is a credit to her trainer, Peter John-Scully, who conceded that she was "handicapped to win".

Walker rode three winners in 3-2 favourite LORD ADMIRAL in the opening race, GRACE MARIE at 5-2 in the fifth and FLUFFY to lead the standings with 33 wins — 11 clear of closest rival Paul 'Country' Francis who failed to ride a winner in the card.