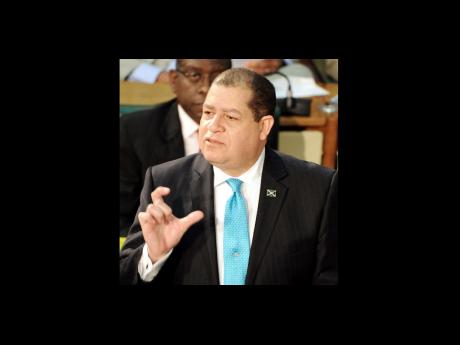 When finance Minister Audley Shaw set about financing the national budget last year, a heavy $8.75-per-litre tax was levied on the backs of all persons purchasing fuel. Needless to say, end users of goods and services, in which fuel was a critical component, felt it in their pockets.

Shaw, at the time of announcing the gas tax, projected it would earn $13.3 billion, 20 per cent of which would be paid into the Road Maintenance Fund (RMF). The finance minister also promised that this year the amount paid into the Fund would increase to 35 per cent, and then to 50 per cent over the next three years.

But like some 'fit it and forget it' auto-mechanic, Shaw has not spoken about the gas tax since. The Gavel waited, and waited, and waited to hear about its performance last Thursday as he opened the 2010-2011 budget debate but, in his more than hour-long presentation, he stayed far from it. We wanted to hear about the yield from the gas tax and whether the committed portion was being used for what was intended. We also wanted to know if the commitment to gradually increase the percentage of the tax paid into the RMF was still a solemn promise.

The finance minister did not touch the topic and we are so disappointed.

However, Shaw being mute on the gas tax was just one source of our dissatisfaction. The minister's proposal of a flat-tax for some category of persons is worrying, to say the least. The idea behind the implementation of this tax is to capture those self-employed persons such as masons, taxi men, painters, and carpenters or sky juice vendors who refuse to pay income tax.

The literature tells us that the flat-tax is simple to collect and that it has fewer loopholes for manipulation, but we believe that Shaw's proposal runs the danger of imposing on Jamaicans who are earning below the tax threshold, the burden of paying income tax that they are exempted from paying under the law. While we support the move for tax reform and would like to see it happen sooner than later, we believe the flat-tax approach would be one of the most draconian measures implemented.

It is the view of The Gavel that Government should peg the delivery of certain services to the filing of tax returns. Those Jamaicans who are unable to provide proof of having filed tax returns for the last tax year should be required to pay the full cost for the service. In the case of health care at public facilities, persons should not be required to present this proof until after they have accessed the service.

People seeking documents such as passports, police records and drivers' licences should be barred from accessing these services unless they provide proof of having filed their tax returns at the last due date. We are mindful that people might lie on their tax returns but The Gavel submits that it is the job of the tax administration department to investigate and establish the accuracy of returns filed.

The approach being proposed by The Gavel would work just as well as the excellent suggestion by the finance minister to twin the application for a tax compliance certificate with the registration for some professional groups. It is high time that we not only talk about the need for all Jamaicans to pay their fair share of taxes but we must also ensure that we are fair in administering tax policies.

It, therefore, brings us to the critical question of the banking act, which has, for too long, aided tax cheats in their dirty deeds. It is an open secret that while tax administration has been able to use third party information such as the purchase of property to track down tax avoiders and evaders, the vast majority of delinquents slip through the cracks. We all know that many persons allow money to sit in their bank accounts and then allow third parties to use it on their behalf, skillfully avoiding the taxman.

Until Government is able to garner the gumption to make the tax administration department a truly independent entity, free of political manipulation, and then give them the power to look into bank accounts and demand Caesar's share, governments will forever speak haplessly about the need for tax compliance.

There is no doubt that bank accounts hold the greatest clue about who is not paying their fair share of taxes. Failure to address this will mean more gas tax, more flat-tax, more salt tax and the dream of reducing personal tax will continue to be elusive.