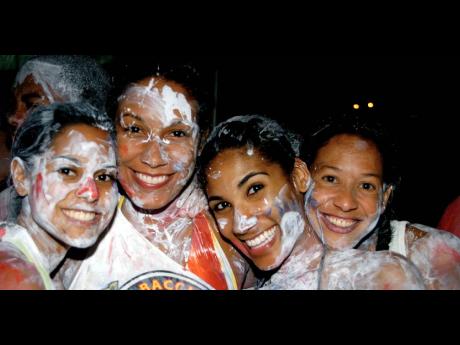 Not even the paint could disguise these women's beauty. 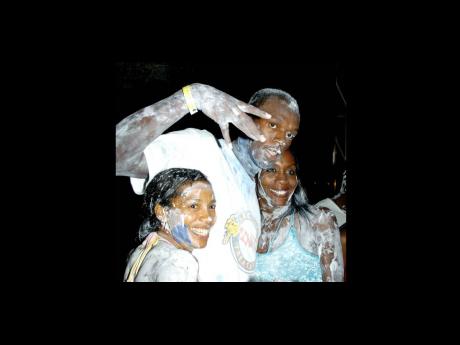 While the focus of Bacchanal J'Ouvert is paint, there were some good performances at the event that preceded the colourful frolicking at Mas Camp last Friday night.

Before midnight, people lymed and danced, the biggest response coming when the selector played Major Lazer and Vybz Kartel's Pon Di Floor, which had them in a frenzy.

With Shurwayne Winchester's name announced, people started moving closer to the stage. He had them jumping as he entered the stage singing Look The Band Coming before moving swiftly into Come Beta. While doing Don't Stop, he seemed very versed on hip-hop moves.

"Yuh can't have carnival without woman," he said before singing Woman By My Side. He took off his vest during Riding It and continued to gyrate. By now, the crowd was getting wilder, as they threw water, ice and various liquids in the air. Very few complained; most just revelled in it. By the time he got to the soca version of I Gotta Feeling, there was just intense jumping across the venue. Then the shirtless, well-toned singer, like a rhythmic gymnast, manoeuvred his rags in all kinds of ways before doing an unexpected full split. Afterwards, he had the people 'palancing' through the venue on one leg.

While short, his performance was spicy and filled with familiar songs that the patrons could enjoy. He must also be commended because he was performing with tracks and not a band. And when there were glitches, the audience barely noticed

After Winchester's abrupt exit, the patrons continued to dance to songs such as Soca Warrior, Bacchanal and Togetherness. Meanwhile, as Usain Bolt entered the VIP area, he was being flocked for pictures. He was not short of attention for the rest of the night either.

The vibe from Imij & Co was felt from the mere beating of the drums before the singers took the stage doing It's Carnival. They, too, sang Palance, which the patrons did not mind hearing another time and many other times throughout the event. In some of their songs, they brought a little rock element. Afterwards, they did songs such as Thiefing A Little Tonight and Push Bumpa, which the people enjoyed.

Eventually, they brought some hip hop into their set with Rude Boy and Blame It, which was very ironic as people could hardly get any liquor at the bar due to the number of people there. Imij & Co soon got the crowd moving to soca again and the people listened to all instructions given. After more than an hour of performing, they left an energetic audience that was ready for paint.

After listening to a lengthy set from the selectors, the people eventually got what they wanted and were immediately in their own little playground. Before long, the only things that could be seen were bodies covered with white paint and splashes of other colours. Mas Camp was just a sea of white as no one was spared from the paint.

About 4 a.m., patrons were instructed to go outside to follow the four trucks. But waiting outside were many people who did not attend the event but wanted to join in on the revelry. As the people danced through New Kingston, onlookers stood at various spots enjoying the entertainment. Bodies were shivering as some people sprayed ice-cold bagged water on to people in the already chilly morning. Those who could manage followed the trucks right through New Kingston before going back to Mas Camp in the wee hours of the morning.