Hoping for a miracle 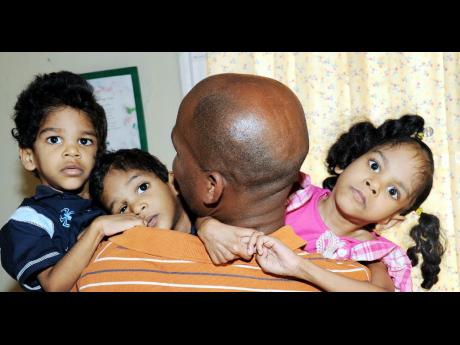 Dad holds up his three children (from left) David, Dishon and Cadaisha. All three, who have their mother's predominantly Indian characteristics, can neither walk nor talk. - Norman Grindley/Chief Photographer 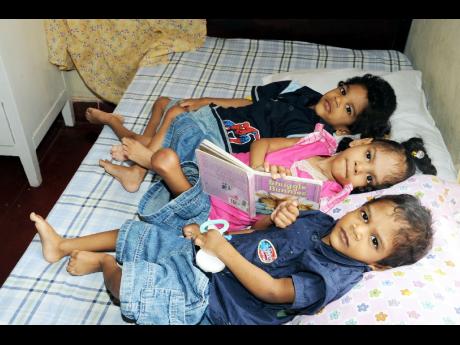 The eldest child, Cadaisha, is sandwiched by her brothers, David (top) and Dishon. - photos by Norman Grindley/Chief Photographer
1
2

A St Ann couple is grappling with the conundrum of a biological jinx that has rendered their three young children unable to walk or talk.

The condition has apparently caused the children - aged three to eight - to be underweight and has badly deformed their limbs - particularly the feet. Though being able to move their hands and feet erratically, they have no sense of balance and communicate only by making sounds or pointing.

The family of five lives in the rustic community of Roadside, a sparsely populated hamlet tucked away amid swathes of wood and pasture, some 19 kilometres (12 miles) west of Moneague.

The parents, who requested that their names not be published because of a fear of prejudice and misunderstanding, said the road to self-disclosure has been long and hard, riddled with episodes of grief and devastation. To preserve the parents' privacy, we refer to them here as Patricia and Carlton, but they assented to disclosure of their children's identities.

Tests to determine the cause of the mobility and speech defects have all come up inconclusive, as an initial Bustamante Hospital diagnosis of cerebral palsy in the first child, daughter Cadaisha, was eventually discounted as similar symptoms surfaced later in the other two siblings, brothers David and Dishon.

"An MRI (magnetic resonance imaging) on the brain was OK. The specialist (brain surgeon) was speculating. She was looking for something in the brain to work with but she didn't find anything.

"We did many tests, but everything came back negative," said the stay-at-home mom.

Reference after reference led them on an endless hunt - from traditional medicine to naturopathy - for an answer which to this day has eluded them. They said a neurologist has recommended that further tests be conducted in the United States to conclude whether the condition has genetic roots, a credible consideration because of the similarity of developmental deficiencies and periods when the symptoms became evident. The last estimated cost of those tests was around US$60,000, the family said,a projection which was made as far back as 2006.

But financial woes have curtailed their search for answers - and for a cure - as Carlton, a forklift operator, is the sole breadwinner. For now, they have had to sacrifice the greater goal to satisfy the more immediate needs of survival.

"We're drained because he is the only one working. That's the reason we didn't continue the investigation. It cost us every time we going in to Kingston, because we had to charter something, and pay for someone to babysit the others, plus we have to pay the neurologist, so it's very, very hard," Patricia, who harbours hopes of publishing a book about their experience, told The Gleaner.

But the family is not daunted by hard times; instead, the couple has thrived on despair. A few years ago, money woes forced them to abandon their rented home in Beechamville, Claremont, 9km (5.6 miles) from their current residence in Roadside, near Harmony Vale, but they soon found refuge in the generosity of a man who allows them to stay, free of cost, in a quintessential old-time Jamaican 'country house'.

The circumstances have had a huge emotional toll on the couple, sending them spiralling, at times, into bouts of depression.

"Many nights she (the wife) get up crying because they're not developing, they going backwards instead of forwards. It's really hurt(ful)," said Carlton, his voice cracking intermittently, as he fought to maintain his composure.

"One time, we try to talk about them, we just break down crying. Now we adjusting, accepting the situation because it doesn't look like they will change."

What is more puzzling, they said, was the fact that such disability had no precedent in their family: Carlton has nine siblings and Patricia seven, and their children are reportedly healthy.

Despite the psychological strain, both parents have been able to plod through their distress, with emotional support coming from their family as well as church members.

They singled out the efforts of the Rev Dwight Whitely, a New Testament Church of God pastor, with encouraging them in their darkest hour when they lived in Bensonton, also in the parish.

"He helped us spiritually, emotionally, prayed for us. He really carry us for about five years, and I tell you, it was a shoulder we could lean on," said Carlton.

The children's mother, whose steely façade occasionally collapsed during the interview, eyes welling up with tears, said her religious convictions had prevented her from throwing in the towel.

"My main help is God. In spite of all the support from people, I have to find the strength within me, and the fact that we cling together, that helps also," said Patricia.

The couple, both in their 30s, said their struggle has honed resilience, serendipitously drawing them closer and strengthening their marriage, which enters its 10th year this summer.

"That's why I haven't put them in a home. This is what God give me, looking on them and knowing that they are mine," she said.

Carlton admitted that he has often found the circumstances overbearing, but said his moments of weakness have melted in the presence of his wife's strength.

"A lot of times I feel like giving up and feel to walk away from the situation but her strength and love for her children keep me going on. She encourage me to take the next step.

"Sometimes it's real hard, being the sole provider, and can't really meet the demand," he lamented.

Give a helping hand

To help this family with educational aid or funds for future medical tests, call local charity Hello Neighbour 906-3167, 884-3866 or 373-7745, or email: neighbourtoo@yahoo.com or editor@gleanerjm.com.