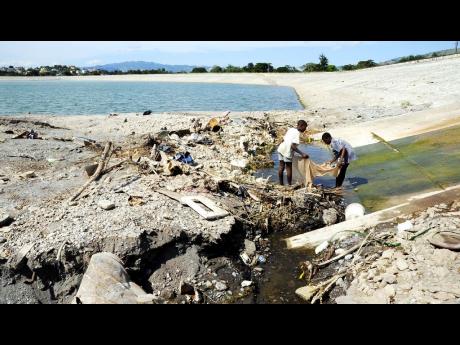 The National Water Commission's (NWC) plan to revive several wells in the Corporate Area as part of a multi-million dollar programme to provide water to persons in drought-stricken communities is facing a major challenge.

The plan, which originally targeted five wells at Hampstead Avenue (off Mountain View Avenue), Rennock Lodge in East Kingston, Devon House, Kings House and Havendale, has since seen this number reduced to two.

NWC's Corporate Public Relations Manager Charles Buchanan told The Gleaner that, while the NWC used several wells to augment supplies from rivers and streams, some wells had been out of operation due to water-quality issues, as well as structural damage.

Drilling done at Devon House and Kings House, two of the well sites which were previously under consideration, have determined that there are extremely high levels of nitrate in the water at those locations.

Basil Fernandez, managing director of the Water Resources Authority (WRA) which protects and manages Jamaica's water resources, said while there are abundant supplies of groundwater to serve Kingston, the nitrate levels are most disturbing,

Fernandez said these nitrates can be traced to seepage from backyard soakaway pits in the Kingston Metropolitan Area (KMA) which eventually finds its way into the groundwater supply,

"If you draw a line between Cross Roads and Half-Way Tree and go south of that, you'll find this water can't be used for domestic purposes at all. We're looking to try and get some numbers and see what the nitrates look like," he said.

Fernandez noted that it was this problem that has caused the closure of several wells, and said only 30 per cent of Kingston was connected to the NWC's sewer main network.

He said most of the wells allocated by the WRA in Kingston are being used for industrial purposes such as cooling and washing.

An example of nitrate contamination can be found at National Heroes Park where the National Solid Waste Management Authority (NSWMA) uses it to water plants as part of its beautification programme.

Asked about the feasibility of processing raw water to remove nitrates in order to make it fit for human consumption, Fernandez and Buchanan both said the costs were extremely prohibitive.

The Havendale well, which was also under consideration by the NWC, had to be abandoned following the construction of an apartment complex at that location which has since rendered it inaccessible to the commission.

"The NWC had abandoned that well as the yield was not very good, " noted Fernandez.

"We did not recommend resuscitatating Havendale number two as it is now, because we found it did not provide much support during the dry season."

Although both the recently rehabilitated Rennock Lodge and Hampstead Road wells are expected to come on stream later this month, concerns have been expressed about their operations.

The Rennock Lodge well, which lies next to Kingston Harbour, has experienced the problems with salinity in the past given its proximity to the sea.

Fernandez said this would, along with the adjoining Long Mountain well, had both experienced salt-water intrusion in the past.

However, he said the water from Rennock Lodge, which was being reactivated at reduced capacity, will be mixed with water from Hampstead in order to control salinity levels.

Another well at Beverly Hills recently activated by the NWC, which was not part of the five earmarked under its drought mitigation programme, is said to have significantly eased the water challenges faced by the company.

Additionally, several new wells in the Bernard Lodge area of St Catherine which were recently commissioned as part of a US$85-million programme to boost water supplies in the KMA are scheduled to come on stream within the next three weeks to further ease the city's water woes.

These include two irrigation wells owned by the National Irrigation Commission, which will be used by the NWC at nights in order to meet demand for the precious commodity in several drought-stricken communities.

Despite the expected increase in inflows from these additional sources, Buchanan remains cautiously optimistic.

"With the implementation of the wells programme, we expect an additional eight to 10 million gallons available to us within this month. That will help, but it will not make up entirely for the much more that we need that we are not able to get from those other sources, " said Buchanan.

"The hope is that we'll get the much-needed rainfall we're looking for in May."