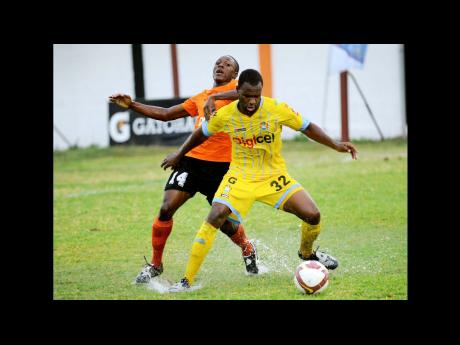 A Roland Dean strike 11 minutes into the second half guided defending champions Tivoli Gardens to a 1-0 win over Waterhouse, in Digicel Premier League action at the Edward Seaga Sports Complex yesterday.

The win moved Tivoli to 66 points, one behind leaders Harbour View, which hammered Village United 3-0 in yesterday's late match, at Harbour View Mini-Stadium. Four rounds remain in the league.

"Playing at home everybody is looking forward to us to win. So to score the all-important goal makes me happy," said Dean, who is returning from injury, and along with strike partner Navion Boyd, was a constant thorn in the side of Waterhouse's defence.

"We just want to continue winning games so that we can win the title. I am not fully 100 per cent yet, but my teammates keep pushing me on and the hope is that I can keep on scoring," Dean added.

His goal came at a time when Tivoli were finding their rhythm after an even first half.

Lurking inside the penalty area, Dean was the beneficiary of a Christopher Jackson square off a short corner. He darted in and lunged to convert the chance in the midst of several defenders.

"Jackson squared a good ball and I am happy I was in the right spot. I am grateful for the goal," said Dean.

The goal peaked interest in the game as both teams thereafter traded attacks, with Waterhouse coming the closest on two occasions, in the 80th and the second minute of injury time.

Both opportunities were thwarted by goalkeeper Edsel Scott, who had one of his better games between the sticks.

Scott, in flying fashion, first saved a header from midfielder Kenardo Forbes, before pulling off an instinctive save from point-blank range off midfielder Mark Miller.

Scott's performance mirrored that of his opposite number, Richard McCallum, who in the first half pulled off diving saves from Boyd and midfielder Jermaine Ricketts in the sixth and 12th minutes.

"I never liked the first half, but we came out better in the second and put some more into our game," said Tivoli's coach, Lenworth Hyde Sr.

"With the title race as close as it is, every three points are important. We just have to maintain this winning momentum," he added.

Waterhouse coach, Geoffrey Maxwell, said it was a good match, although he would have preferred the game ending in at least a draw.

"It was a very competitive game overall, even though I thought we backed off too much. We could have also equalised towards the end, which would have made me happier," said Maxwell.

NB: Sporting vs Arnett Gardens at Brancourt was rained out.