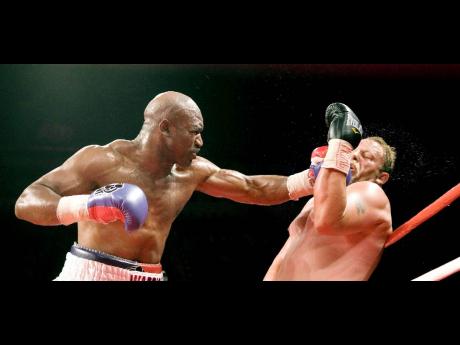 Evander Holyfield (left) lands a left to Frans Botha in the sixth round of their World Boxing Federation heavyweight championship bout at the Thomas & Mack Centre on Saturday. Holyfield won by technical knockout in the eighth round. - AP

Former heavyweight champion Evander Holyfield is using George Foreman's comeback more than 15 years ago as inspiration after notching his latest victory on Saturday.

The 47-year-old Holyfield (43-10-2, 28 KOs) won by TKO against 41-year-old Frans Botha with 2:05 left in the eighth round. Holyfield had knocked down the South African 31 seconds earlier with a right to the chin.

"I'm going to be the undisputed heavyweight champion of the world," Holyfield said.

Two judges, Jerry Roth and Glenn Feldman, had Botha ahead 67-66 when the fight was stopped. The other judge, Herb Santee, had it 69-64 for Holyfield.

"I'm happy Botha gave me an opportunity," Holyfield said. "When people talk about you, it's who I fought. I fought the best."

There were only 3,127 people at the Thomas & Mack Center, most rooting for Holyfield in his first fight since December 20, 2008, when he lost a majority decision to Nikolay Valuev.

"George Foreman said, 'it's not about my age'," Holyfield referred to what the former champ said back in the 1990s. "He became heavyweight champion of the world."

In the second round, Holyfield briefly lost his balance, stumbling into a corner after a right from Botha with 2:04 left.

"(Holyfield has) got the skills. He's got the determination," Botha said. "He landed his shots. He's a true warrior. I didn't feel ashamed losing to a great champion like him."

At the post-fight press conference, it was mentioned that Holyfield would like to fight one of the Klitschko brothers, who hold three of the four major heavyweight belts. Wladimir Klitschko holds two titles, while Vitali holds one.

Early on, Botha was warned by the referee twice in the first three rounds for hitting behind the head. Botha also was warned in the first round for a double hit to the head during a clinch.

This was Holyfield's first fight in Las Vegas since 2003, when he lost to James Toney at Mandalay Bay.

Before Saturday, Holyfield was only 10-6 in Las Vegas, including the infamous ear-biting incident against Mike Tyson in 1997, when he won by disqualification.