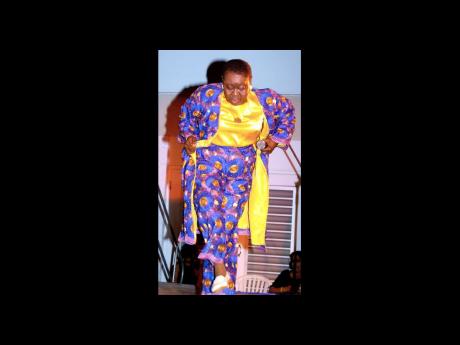 Calypso Rose shakes a leg during her performance at Vintage Meets Soca at The Jamaica Pegasus hotel last Saturday. 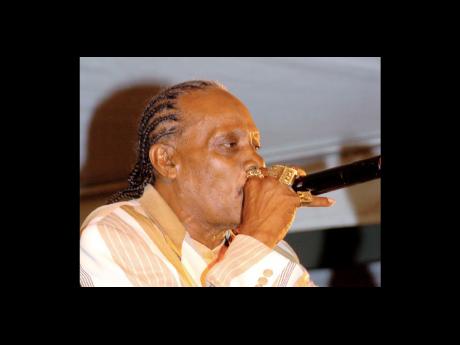 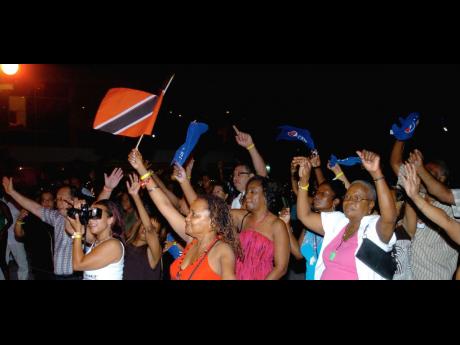 A Trinidadian flag sticks out among the jovial patrons at Vintage Meets Soca. - photos by Winston Sill/Freelance Photographer
1
2
3

In-between the multicoloured madness of J'Ouvert morning last Saturday and the exposed exultation of Sunday's Road March on Saturday night, the carnival season offered something for the keener listener and more sedate dancer at Vintage Meets Soca.

However, being a less frenetic dancer does not mean being less involved in the music or adept at movement and, indeed, there is a certain hypnotic charm to the slower hip movement (performed or observed) which eludes the high-speed gyration. There was plenty of that movement at The Jamaica Pegasus, the gathering at the New Kingston hotel's poolside a blend of ages, but more on the vintage side.

And so were the performers, in an irrepressible Calypso Rose ("They call me lioness of the jungle at 70. What them would call me in me younger years?") and a happy Baron, who remembered the standstill reception he got at the first Jamaica Carnival. "I start to feel weird. Then I say is a good sign. One day you will be back. And this is my third time," he said. The band on the stand was Byron Lee's Dragonaires, a drummer in place instead of the drum machine of previous years. Then there was Merritone sound system, which celebrates 60 years this year, playing timeless music to get the substantial audience dancing.

But it was for Calypso Rose that the standers separated themselves from the sitters, getting close to a beaming, blooming Rose while those who took the sedentary and sipping approach to the party took it easy, while paying attention, in the chairs on both sides of the pool. Those up front gleefully took up Rose's opening invitation to Leh We Punta, her long blue and gold coat swinging over her gold blouse.

There was a pause for patter between songs in what turned out to be a short performance, Rose speaking about travelling extensively over the last 10 days (Benin and the United States among her stops before Jamaica), memories of Byron Lee's 1977 trip to Trinidad and Tobago and her involvement in the first Jamaica Carnival.

And Rose, who dedicated her performance to "Sir Byron Lee", pointed out that she is one of only three Caribbean entertainers who have been bestowed the title of honourable, the other two being Bob Marley and The Mighty Sparrow.

The audience listened to her speak and her lyrics and danced as she sang, from Rose's declaration of Senior Citizen Day and Ju Ju Warrior (in which the line "sending me arrow straight to Jamaica" speaks to sending Carnival up the Caribbean archipelago) to her joyous "we going down to San Fernando" and incendiary closing Fire Fire.

And the jacket did not stay on through it all, Rose showing the full glory of her golden blouse - and her golden-age waistline - in the process, even singing her way offstage and then back on at one point.

Baron entered with a Melosian Rhapsody and also paid respects to Byron Lee. Although he too had between song patter and, as with Rose, the songs were played out at length, the energy was different - less humour with more of a steady groove. The standers thinned slightly, but the party was definitely still on, one white man with a half-bald pate sandwiched between two black women, the taller one behind sporting a shock of natural black hair, the one in front bouncing her store-bought (but still her own) brown tresses. He was obviously Feeling It, as Baron was singing onstage, but it was more the women who were The Jammer, Baron's jacket now off.

He closed with a song about himself which he confesses he did not like much, but is now a must anywhere he performs. It was Sweet Soca Man and it was really sweet soca to the end.

Merritone, with Craig Ross spinning the music, changed the genre while keeping the groove going, the standers slipping into the new beat of December 1963 (Oh What a Night) and the sitters and sippers continuing to do what they were enjoying.