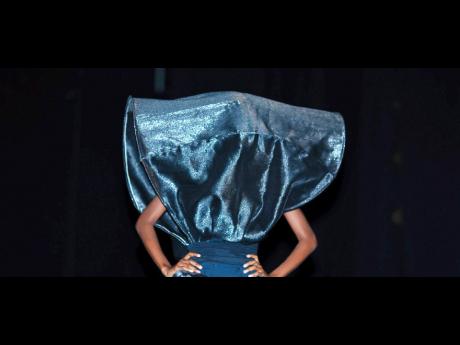 The avant-garde design by Gregory Williams that won the competition. 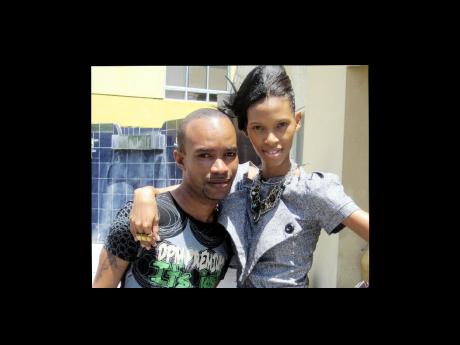 No one knows the limit for Gregory Williams, the 2010 Saint International avant-garde Designer of the Year. What is known is that the 26-year-old designer took on and topped a talented group of designers a month ago, catching the eye of some powerful international fashionistas and setting himself up for what he believes will be a stellar career as a fashion designer - his dream come true.

The challenge was to create an avant-garde creation to represent the major sponsor, LIME. It had to be cutting edge, stylish, trendy and technology-inspired. What Williams dreamed up was an out-of-this-world 'satellite dress'. "His piece was really outstanding," said Saint International CEO Deiwght Peters, who revealed that among the panel of judges was Wayne Sterling, editorial director of Models.com. Sterling, he said, has promised to help position the talented designer to succeed internationally.

Growing up in the Slipe Road area before moving to Braeton Meadows in Portmore, Williams went through the motion as a student of the Allman Town Basic School, Port Henderson Primary and Greater Portmore High, all the while knowing he was cut out for something more. In 2003, he said, his cousin Lashonda Murray, who lives in New Jersey in the United States, got him bitten by the fashion bug after she introduced him to boot-cut jeans.

"From that time I started watching fashion programmes and started practising on my cousin Natisha Wynter," he said. "She is my muse. She brought out my creativity."

He knew then that he had found his place in life - that thing that would complete him.

"I remember, at the time, I told my aunt that the best thing (for me) was to try and make it in fashion," he said. "Everything I see is fashion. I get inspiration from any angle."

Williams eventually became a stylist, developing a cadre of female clients who, more often than not, were unable to find what they wanted to wear in the stores. Among them was singer Ashley Martin, who Williams had styled and offered fashion tips for about three years. Martin introduced Williams to Peters in February last year while he was organising Saint's annual Fashion Face of Summer 2009 eliminations. Peters was immediately taken by the young designer.

"I knew he was something special. When he came to meet me with a few pieces at Stella Maris, I was quite impressed by his energy and his genuine passion for fashion and design," Peters said. "He was not trained in fashion and design (yet) he showed an understanding of fashion."

Peters had him do a collection for the Fashion Face of Summer and when designer Kevin Obrien, who was a judge at the eliminations, saw Williams' work he was so impressed he walked up and shook his hand. "Wow," was how Williams reacted to that moment. "When that happened nobody could tell me I was not ready."

He also dished praise to Saint's models, who he said wore his pieces well. "If it wasn't for the clothes I would not have gotten these girls. I loved the attitude that they brought and I did not have to tell them how to wear the pieces."

For Saint International Fashion Week, May 27-30, Williams is creating two collections and he intends to use that opportunity to shine even more brightly.

"I won't let Saint down," he said, eager to prove himself once again that he has what it takes to make it in fashion.

Peters is confident that Williams will succeed. "I like his detail, what he does with style," said Peters, who notes the number of international endorsements Williams has been getting and added that he will be working in the coming months to get Williams on projects in Europe, Africa and the United States. "I expect great things from him in the future."

The young designer is champing at the bit, raring to go. "I want to design from the ground, right up to the sky," he said.

How far up? Only time can tell.