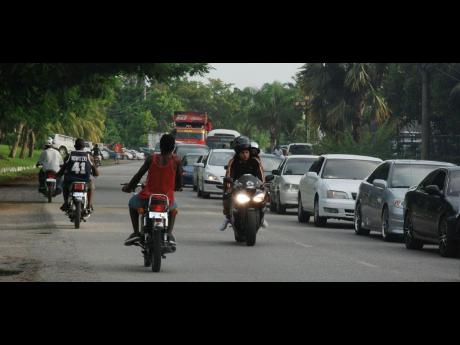 Bike taxis going to and fro along the long line of traffic in Negril in September 2009. - Photo by Janet Silvera

Far from the seat of governance (Kingston), Negril has sunk into a daily 'loathsome hell of noise' with dire consequences to our tourism effort.

A normal week includes jet skis roaring full speed ahead from 8:30 a.m. along the swimming buoys, shouting their offers of rides to the swimmers, until dusk. The racing of traffic along the Norman Manley Boulevard and the lighthouse road, as well as motorbikes being raced against each other. By 2 p.m., sometimes earlier, seven days per week, we have cars or boats with loudspeakers promoting, in garbled language at high volumes, some shows, back and forth around Negril.

Then we have the shows sometimes starting in the afternoon, others much later - all blasting not only their direct neighbours but often with the deep sounding of the bass at full volume, reaching 800 to 1,000 metres away! The deejays are forever screaming in their microphones, enticing the public to shout for one thing or another. Then you have the roaring cars, motorbikes, etc. leaving the shows sometimes at 6 a.m. or any other time the promoters choose to stop! The next day more of the same!

Many repeat guests, who have been coming to Negril for years and years, bringing in friends and relatives, not only have crossed Jamaica from their cherished destination list but have spread the word that the noise factor is unbearable in Negril, never mind the Noise Abatement Act!

It may be of relevance to point out that as citizens of Jamaica we understand that Parliament, having passed the Noise Abatement Act in March 1997, the said act having being duly gazetted, it became a law. We were all unaware that a minister at the stroke of a pen changed the terms of that law and authorised an extension of the time limits stated by the said Noise Abatement Act to some shows!

A letter was sent to the minister of sports, entertainment and culture, Olivia 'Babsy' Grange, regarding this matter on March 27, 2009. However, the same approach was repeated in March 2010, with the granting of other extensions to some shows. We would like to point out that such extensions make a mockery of the law, prevent any enforcement of the law established in 1997, and thus render the police helpless.

Also, why are some shows extended and not others?

Finally, it is worth noting that the overwhelming majority of these show promoters do not have hotels, villas, guest houses or rooms to rent, therefore, are not concerned about the tremendous amounts of complaints from guests or residents. They have open-air areas and are only interested in the cash earned during their shows.

On February 5, a letter was sent to Minister of Tourism Edmund Bartlett requesting that we meet with him re: 'The Noise Pollution of Negril'. As no response was forthcoming, a phone call was made early March, but a secretary explained that the minister was very busy. By the second telephone call, the same secretary explained that Mr Bartlett was off the island until March 18. To date, there has been no response to our letter. This letter was signed by several business owners and residents of the Negril community.

We shall put in motion a procedure that will give us some power to ensure that Negril returns to sanity.