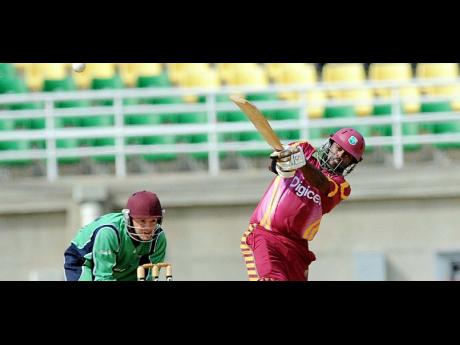 Describing the festival thus far as a welcome warm-up ahead of the ICC World Twenty20 championship, which will be held in the eastern Caribbean later this month, Gibson pointed out that the two did not perform well in the Twenty20 clashes against Canada and Ireland at the Trelawny Multi-Purpose Stadium on the weekend, and he was looking forward to them stepping up their game.

Chanderpaul, batting as an opener in the two games, posted scores of 10 and one, while Sarwan has so far tabulated five and two.

"We are happy to win the two games thus far. We saw players like Deonarine and Hinds batting with responsibility in the middle when the team was in pressure situations, and Sammy showing how much of a big hitter he is. But we have not seen a solid innings from either Shiv (Chanderpaul) or Sarwan," said Gibson.

"We are hoping that they can come good today and help us to maintain our winning momentum," he added.

The West Indies will enter the match without the services of fast bowler Jerome Taylor and wicketkeeper Denesh Ramdin.

Taylor, according to Gibson, is not fully ready for the rigours of one-day cricket, and will miss today's as well as Thursday's other one-day clash against Ireland at Sabina Park.

However, Taylor is expected to play on the weekend when the West Indies go up against Ireland in back-to-back Twenty20 Inter-nationals, also at Sabina Park.

Ramdin, in the meanwhile, who arrived in the island last Sunday, has not yet fully recovered from a stomach illness. His absence will leave substitute keeper, opener Andre Fletcher, to do the glove work again.

The West Indies made 130-7 in their 20-over game against Canada, before returning to restrict the North Americans to 81 off 19.1 overs.

In their second match, against Ireland, the Windies recorded a 31-run victory after limiting the Europeans to 112 for seven off 20 overs, as they chased the regional team's score of 143-8.

In the meantime, Canada's coach, Pubudu Dassanayake, hopes they will reverse their fortunes.

"We didn't do too well as Jamaica made 175, which was pretty much unreachable for us. We are now hoping to have a better time at Sabina Park," said Dassanayake after their defeat to Jamaica last Sunday.

The West Indies will close out their festival appearances with a one-day and two Twenty20 matches against Ireland at Sabina on Thursday, Saturday and Sunday, respectively.