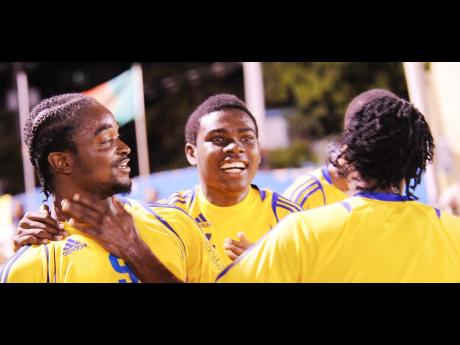 With just four sets of matches remaining in the 2009/10 Digicel Premier League, leaders Harbour View are seeking to remain focused on the task at hand, which is to win all of their remaining games.

However, they are taking a rather interesting approach to doing so as they focus on the occasion, rather than their opponents.

"We are in the last five games of the season and we need to win. So we are not looking so much at the opponents, it is going to demand a lot of concentration and hard work regardless of who we are playing,"said Donovan Hayles, coach of Harbour View, whose 67 points give them a one-point advantage over second-place Tivoli Gardens, the defending champions.

Continuing, Hayles said: "These teams are not playing under much pressure as they don't have a chance to win the Premier League, but they can improve their status in the competition so they are playing in a more relaxed manner. So, the pressure is always on ourselves and Tivoli Gardens, so we have to just maintain it and keep fighting hard."

His team did display good fighting spirit on Sunday to beat Village United 3-0 at the Harbour View Mini Stadium.

Under-21 player Jahmali Spence scored his second goal in as many games this season to give the Stars of the East the lead in the 17th minute.

Jermaine Hue was then brought down in the box, resulting in a penalty which Marcelino Blackurn expertly dispatched for his eighth goal of the season to make it 2-0 in the 34th minute.

Kavin Bryan got Harbour View's third in the 53rd minute after chasing down what appeared to have been a hopeless ball, before playing a quick one-two with Kimarlee Brissett, which resulted in his having time and space in the box and he used it to good effect to hammer home.

Village United showed good character and launched several good attacks of their own, from which they should have pulled back at least one goal.

Hayles was disappointed with the fact that they gave up the opportunities.

"After getting three goals I thought we got a little indisciplined and we gave Village a lot of look-ins and on a better night for Village, they probably would have scored one or two goals," said Hayles.

"So we cannot be that careless around the back and I am very disappointed where that is concerned," he added.

Village United's assistant coach, Norman Foster, blamed poor defending and the failure of his players to capitalise on their chances for the loss.

"Defensively we weren't sound this evening, the tracking of players and marking around the back was not good," said Foster.

"I think we started out a bit slow but at the end of the game we kind of pick it up where we got couple chances but we never put them away and it cost us the game and we lost 3-0," he added.