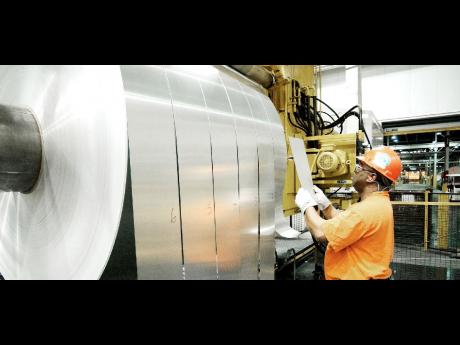 Alcoa Inc opened the earnings season with a narrower first-quarter loss as demand for some aluminum products picked up from a year ago and prices rose.

For the quarter that ended March 31, Alcoa, controlling partner in the Jamalco Refinery at Clarendon, on Monday reported a net loss of US$201 million or 20 cents per share.

That compared with a net loss of US$497 million, or 61 cents a share, a year ago, when the company struggled with weak demand in the depths of the recession.

Alcoa's first-quarter results include US$295 million, or 29 cents a share, in one-time charges related to the health care reform law and the closing of two smelters.

Analysts surveyed by Thomson Reuters forecast, on average, earnings of 10 cents a share. They typically exclude one-time items. Revenue rose nearly 20 per cent to US$4.9 billion.

That missed Wall Street's estimate of US$5.24 billion.

"2010 will clearly be better than 2009 but it's going to be below historic norms in many of the markets," Klaus Kleinfeld, president and CEO, told analysts in a conference call.

Kleinfeld expects Alcoa to benefit from a rebound in global automotive production this year, while the company's packaging business for cans and other containers remains flat.

Kleinfeld says aluminum consumption worldwide should grow by 10 per cent in 2010, driven strongly by demand from China and improving demand in the United States and Europe.

Alcoa's average realised price per metric ton of aluminum in the first quarter was US$2,331, up from US$1,567 in the same period a year ago.

Argus Research analyst Bill Selesky doesn't think that means you'll soon be paying more for drinks in aluminum cans or other products made with the metal.

"I think you have to see if it continues," Selesky said. "I think on a short-term basis, it really has little effect on the consumer."

Selesky described the quarter as lacklustre.

"All the year-over-year numbers look very good. However, the sequential results are somewhat lagging. Sales from the fourth quarter to the first quarter, the overall demand is down 11 per cent."

Alcoa, based in Pittsburgh, is the first company in the Dow Jones Industrial average to issue earnings results, and its performance can reflect economic trends because of its diverse customer base, which ranges from aerospace and construction to electronics and beverage cans.