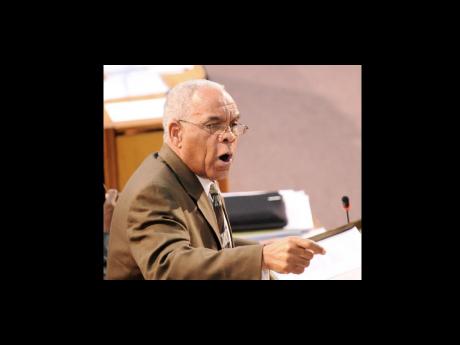 OPPOSITION SPOKESMAN on Finance Dr Omar Davies is cautioning the Government against setting up what he claims are unrealistic fiscal targets and has stopped just short of advising the administration to prepare for mass protests if a tax package is announced this year.

"Regardless of any agreement with any organisation, anywhere, there is no chance that any further taxation can be tolerated by the population. The hardships are very real and there are significant sections of the population which are hurting," Davies declared as he addressed the House of Representatives yesterday afternoon.

The opposition finance spokesman was making his contribution to the 2010-2011 Budget Debate in Parliament, the first since Jamaica re-entered a borrowing relationship with the International Monetary Fund (IMF) in February.

The IMF has outlined the parameters under which Jamaica's economy must operate. Included among the requirements is a directive to eliminate the budget deficit by 2013-2014.

However, Davies, who served the country as finance minister for 14 years, claimed the past fiscal year was characterised by chaotic tax packages and poor economic management under Finance Minister Audley Shaw's watch.

Pointing to the targets for fiscal year 2009-2010, which began with a 5.5 per cent projection and was revised twice to 10.9 per cent of GDP, Davies said the 6.5 per cent budget deficit being projected for this year rings hollow.

"Don't set up impossible targets to embarrass yourself or to mislead yourself," Davies advised.

Shaw told Parliament last week that Government would be running a fiscal deficit of 6.5 per cent. However, Davies said Shaw's record of missing targets was indicative of a credibility problem.

"The minister needs to indicate to us why the country should believe that he will be able to meet the target this year when three targets in 2009-2010 were missed," Davies said.

The constant revision of the deficit targets last year was tied in with Government's decision to introduce three tax packages throughout the fiscal year as it struggled to fund its programmes.

Preliminary data out of the ministry of finance indicates that, even with the tax packages, tax revenue fell short of projection by $26 billion. Shaw had projected to earn $291.6 billion from taxes but raked in $265.8 billion.

This year, the finance minister is projecting to earn $287 billion from taxes to finance his $503-billion Budget.

A fiery Davies told Parliament yesterday that Shaw needed to explain "why there should be confidence that we will be able to meet the target of $287 billion, given the clear evidence that taxpayers are maxed out in terms of their disposable income".

Davies noted that this fiscal year would reflect the first full year in which the population will be facing "the full brunt of the ... tax packages presented to us last year".

Government also increased property taxes at the start of this fiscal year.

Davies has questioned whether any study has been done to determine whether the expected revenue can be "squeezed from the population". He said there was no question that financing the Budget this year poses special challenges.

Suggesting that Government might eventually be moved to consider new taxes, he, however, noted that "the special difficulty we face is that within the context of an IMF agreement with specific deficit targets agreed to, the options are few if revenue falls below projection."