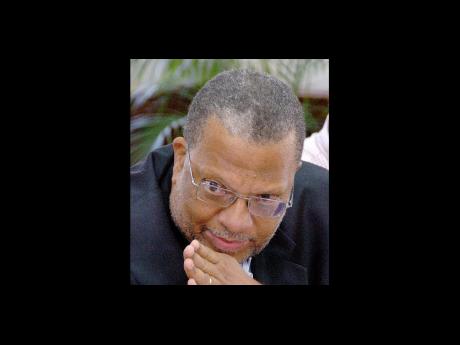 Since suffering a demoralising loss to Portia Simpson Miller in the People's National Party's (PNP) presidential race two years ago, Peter Phillips had settled into the largely obscure role of parliamentary elder statesman.

But last month, Phillips' disclosure that the Jamaican Government had hired an American law firm to work as consultants in the knotty extradition case involving West Kingston kingpin Christopher 'Dudus' Coke, once again made him front-page material.

Prime Minister Bruce Golding has denied any link with Los Angeles-based law firm Manatt, Phelps and Phillips, but it has provided evidence showing it was paid US$50,000 by the Jamaican Government to work on its behalf in the Coke affair.

Immigration authorities in the United States (US) say Coke is leader of the Shower Posse, a notorious gang linked to more than 1,400 murders in that country.

They are pushing for the Golding administration to extradite him to the US to face charges of drug and gunrunning.

Phillips' revelation has breathed new life into a career most political commentators declared dead in September 2008 when the 'solid as a rock' sloganeer was soundly beaten by Simpson Miller in his second attempt at the presidency of the PNP.

Last week, during an interview with The Sunday Gleaner, the 60-year-old Phillips played down talk of a comeback.

"I had no political considerations in raising the issues relating to Manatt, Phelps or the extradition," he said.

"The fact is that I have always seen public life as a matter of service. It has had its personal ups and downs, but as long as I am in it, it's important to serve the best way you can."

Phillips seemed to call time on his political future just days after an embarrassing loss to Simpson Miller in an acrimonious party poll. Within days of his defeat, he resigned as the PNP's spokesman on national security and leader of opposition business in the House of Representatives.

In 2006, Phillips' future was anything but uncertain. He held a safe parliamentary seat (East Central St Andrew), was national security minister, a vice-president of the PNP, and one of the main contenders to succeed P.J. Patterson as party leader and, ultimately, prime minister of Jamaica.

In February that year, he lost a close race to Simpson Miller. Then, almost one year after the PNP's loss to the Jamaica Labour Party (JLP) in the general election, announced a second crack at the party leadership.

After he lost that poll by 373 votes, many critics said his 2008 run was ill-advised.

"It wasn't an issue of timing. I put out the issues that I saw but the party formed its view and we lost the election," he reasoned. "The important thing is, I've moved on."

Sunday Gleaner columnist Ian Boyne was among those not prepared to write off Phillips. He still believes Phillips has a major role in Jamaican politics.

"Peter is one of the most hopeful politicians around because he has that ability to build strategic alliances, and that's critical in Jamaican politics," Boyne explained.

"I don't think it would be wise for him to challenge (Simpson Miller) again but his leadership skills are definitely needed."

Like Golding, Peter Phillips saw first-hand the divisive politics their parties practised during the turbulent 1970s when Jamaica was led by Michael Manley, one of Phillips' heroes.

When he joined Patterson's Cabinet in the early 1990s, Phillips said he wanted to change the perception of Jamaican politicians as well-dressed "ginnals" who armed ghetto youth to keep the party machinery intact.

Phillips' own reputation took a hit in May 2001 when he, along with Finance Minister Omar Davies and Water and Housing Minister Karl Blythe, attended the funeral of William 'Willie Haggart' Moore, leader of the notorious Black Roses Crew.

While Phillips is critical of what he says is the Golding administration's lack of transparency and vision, he admits that the PNP administrations in which he served fell short in critical areas of national security and education.

Phillips produced a manifesto of what he believed were adequate solutions to Jamaica's problems during his unsuccessful presidential campaigns. But he does not see another run for high office in the near future.

"The position of prime minister and leader of the party are occupied, there are no vacancies. So, right now that's not a preoccupation of mine," he said.