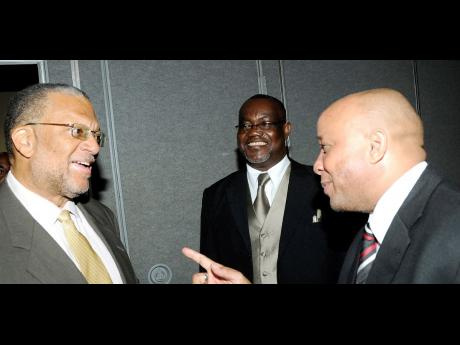 Peter Phillips believes it is too early to say if the current row between the Jamaican Government and United States Drug Enforcement Agency (DEA) over the extradition of West Kingston don Christopher 'Dudus' Coke will affect Prime Minister Bruce Golding and his Jamaica Labour Party (JLP) in the next general election.

However, he said it would be a shame if the issue is forgotten in two years when national polls are expected to be held.

"I haven't made the calculation whether it will hurt the Government politically, but I certainly hope it won't be a political benefit," Phillips told The Gleaner. "If it is (forgotten), it means the moral compass of Jamaica would have been badly damaged because this goes beyond party politics."

The Dudus dilemma has dogged the Golding administration since August last year when the DEA called for Coke's extradition to the United States (US) to face narcotics and gun-trafficking charges.

It claimed Coke was leader of the Shower Posse, an infamous organisation with strong ties to the JLP and West Kingston for which Golding is member of parliament.

Despite criticism from the Private Sector Organisation of Jamaica and the Jamaica Chamber of Commerce, Golding has stood by Attorney General Dorothy Lightbourne's stance that the US has not provided sufficient incriminating evidence for Coke to be extradited.

Phillips is disappointed at how Golding has handled the situation. He says it goes against the transparency Golding promised during the 2007 general election campaign.

"There are many Jamaicans who don't even share his political affiliation who had hoped that the prime minister, as someone representing a different generation, would have offered a different approach," Phillips said.

Golding was first elected MP at age 25 in 1972 but left the JLP in 1995 to head the newly formed National Democratic Move-ment, saying he had turned his back on partisan politics. He returned to the JLP weeks before the 2002 general election and was elected president in early 2005, shortly after Edward Seaga retired.

During the run-up to the 2007 election, Golding vowed that if he became prime minister, he would help dismantle fractious garrison communities loyal to the JLP and PNP. Ironically, Golding now represents one of Jamaica's most politically partisan constituencies, in which lies the fanatically faithful community of Tivoli Gardens, dubbed by a former army chief as the "mother of all garrisons".

Phillips says the prime minister has not lived up to his word.

"Unfortunately, what we have seen is a regression, and a flouting of the law never before seen in any previous administration," he said.