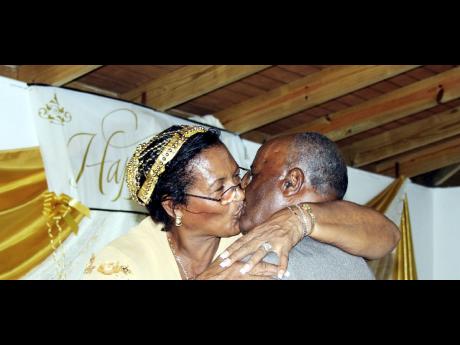 Mary and Daniel Duharty, who are celebrating their 50th year of marriage, seal it with a kiss at their early-bird golden anniversary party at the Retreat Heights Community Centre on Saturday. - Photo by Richard Morais

After 49 years of marriage, Mary and Daniel Duharty are ready to start all over. And they have.

The two, who were so keen on their 50th anniversary they marked it four months early, renewed vows in a ceremony at the Retreat Height Community Centre on Saturday.

While this time they said, "I will", instead of "I do", in keeping with modern vow trends, it was apparent that the passion was there as much as it was on the momentous day of August 10, 1960 in Kingston. The celebration was held early in order to facilitate family and friend's schedules.

Saturday's ceremony was officiated by their pastor, the Reverend Dr Vincent Fletcher.

The couple recalled their first meeting in Lionel Town, Clarendon, 53 years ago.

According to Mrs Duharty, "I was working when he came to collect something, as he was working at the Monymusk Estate. He started watching me and then asked when I would leave work."

Mrs Duharty said she told Daniel out of courtesy, the time she would leave work, but she wasn't interested in him. However, he persevered.

"The rest is history," she added.

Saturday's vow renewal was a lavish affair. Among the guests were Falmouth Mayor Colin Gager.

The couple lived in England for 35 years before returning in 1993. The Duhartys were praised for their industriousness, as they both worked at factories.

The occasion doubled as a family reunion, with four of their five children, their spouses, and some of their 15 grandchildren attending the function.