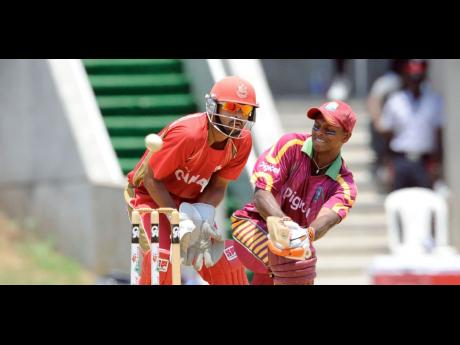 West Indies batsman Shivnarine Chanderpaul (right) hits the ball through the legside on the way to scoring a century, while Canada's wicketkeeper Ashish Bagai reacts, during their one-day international at Sabina Park yesterday. - Ricardo Makyn/Staff Photographer

Playing as an opener as the West Indies seek to find a winning combination ahead of this month's ICC World Twenty20 championship, Chanderpaul scored 101 off 121 balls as the home team, after winning the toss, posted 316-4 off their allotted 50 overs.

In reply Canada, who were never in with a chance, were bundled out for 108 off 39.2 overs.

It was Chanderpaul's 11th one-day hundred and came after a three-hour occupation of the crease. He ticked off a mere six boundaries and a six, and shared in two valuable top-order partnerships.

The first was with opening partner and stand-in wicketkeeper Andre Fletcher, who made 48 off 56 balls.

The two put on 88 for the first wicket before Fletcher, going for one shot too many across the line, was caught at short midwicket off the bowling of 19-year-old left-arm orthodox spinner Parth Ajaykumar Desai.

Chanderpaul then teamed up with World Twenty20 reserve batsman Darren Bravo and the pair put on 143 for the second wicket before the Trinidadian, who was eyeing his first one-day hundred in his seventh match, was cleaned bowled by a yorker from pacer Rizwan Ahmed Cheema for a near run-a-ball 74, which included two sixes and six fours.

Darren's dismissal then brought to the crease Ramnaresh Sarwan who, prior to the match, like Chanderpaul, was struggling for runs after the first two games of the festival.

The pair added eight runs before Chanderpaul, one ball after reaching his century landmark, was caught at long on off the bowling of pacer Umar Bhatti with the score on 239 in the 42nd over.

Sarwan, who went on to compile an uncharacteristic 26-ball unbeaten 47, and the in-form Narsingh Deonarine, who made 31 off 24 balls before falling with two balls remaining in the innings, then guided the West Indies to their imposing total.

Wavell Hinds, who did not face a ball, was the other not out batsman.

In their turn at the crease the Canadians lost their first wicket in the second over with the score on nine and never recovered.

Bhatti, 32 not out, and Zubin Surkari, 19, ended as their top scorers against spinner Nikita Miller, who ended with 3-15 of 9.2 overs. Stand-in captain Darren Sammy and Sulieman Benn finished with two wickets apiece.

The West Indies will next turn their attention to Ireland, who they will play tomorrow in a one-day international at Sabina Park, then on to the weekend when they will play back-to-back Twenty20 matches against Ireland and Canada at the same venue.