Mojo 6 off to pleasing start 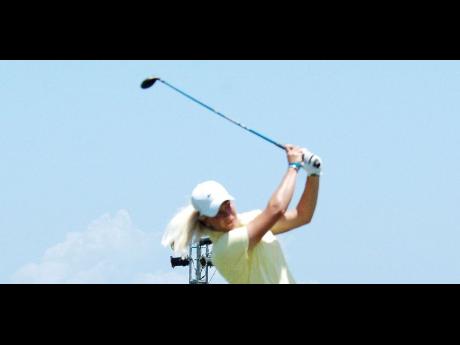 The scenic Cinnamon Hill Golf Course in Montego Bay came in for much praise yesterday, as the inaugural Ladies Professional Golf Association (LPGA) Mojo 6 Raceway Golf Tournament got going with the first of two days of Pro-Am action, featuring teams of professional and amateur players.

While the results of Day One will not be officially made known until tonight's Pro-Am awards ceremony, most of the golfers came off the course expressing much satisfaction with both their individual performance and the way the course played.

"It was awesome out there. The greens are wonderful and the atmosphere just great," said two-time LPGA champion Christina Kim, whose group shot a good 11 under-par. "I can't wait until Thursday when the main tournament starts."

Christie Kerr, an 11-time LPGA champion, generated a great deal of interest from the spectators as her group, which featured Oliver McIntosh, Jordon Wong, Mitchie Bell and Richard Joseph, traversed the six holes (7, 1, 3, 4, 5 and 6) which are being used for the Pro-Am.

Soaked up much attention

Locals like Maurice Foster, who played in a group with 2009 LPGA winner Suzann Pettersen, and many-time national champion Jodi Munn, who played alongside Christine Kim, also soaked up much attention, as well as Spanish golfer Beautriz Recari, who qualified for the tournament via an online 'fan choice' voting competition.

President of Mojo 6, Joy Stephenson, who sported a broad smile as she followed the progress of the golfers, said she was thrilled by what she saw on the course and what she has been hearing from the golfers.

"Day One was just awesome and it has done a lot to showcase Jamaica as a world-class golfing destination," said Stephenson. "The golfers have all given the course high marks and they are all expressing much pleasure in being here."

The main part of the tournament is the two-day Mojo 6 Raceway showdown, which will be staged on Thursday and Friday and will feature 16 of the top female golfers on the LPGA circuit, vying for a top prize of J$1 million.