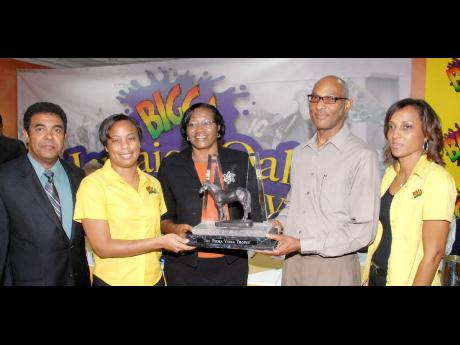 The season's third classic, the Bigga Jamaica Oaks, for native bred three-year-old fillies, will be run at Caymanas Park on Saturday, August 24 and in keeping with the Ladies Day theme, 12 women who have distinguished themselves in the wider society will be honoured.

This was announced by representatives of the sponsors, Wisynco Group, and promoters, Caymanas Track Limited (CTL), at yesterday's launch of the fillies classic at the Courtleigh Hotel. New Kingston. The race, to be run over 2000 metres, will mark its 71st running and offers a total purse of $3.3 million.

Caymanas Track Limited's (CTL) director of marketing and promotions, Chris Armond, noted that the Oaks is one of the most important races on the calendar, especially for the breeding industry.

"The race itself will be round three of a battle which developed earlier this year between the two top contenders, Guineas winner AL FOUZIA and the runner-up GABIWITZO," added Armond.

Both horses hold a victory over each other and it should be fireworks when they meet again in the Oaks.

Wisynco, through its flagship brand Bigga soft drinks, has once again donated $1 million to the promotion - $700,000 going directly to the purse of the Oaks and $300,000 to supplement the purses of six other races on the card.

Speaking on behalf of the sponsors, Karen Rosen, Wisynco's group marketing manager, said they are satisfied about the women who will be honoured.

"The original list of nominees was long and varied," said Rosen. "We feel quite satisfied that the final 12 who we have chosen make a statement about the vibrancy and accomplishments of Jamaican women in general."

The awardees are Andrea 'Delcita' Wright and Dahlia Harris for their work in theatre; Andrea Coy and Tina Myers for their endeavours in business; Marlene Malahoo-Forte for her contribution to the legal profession; Paula-Anne Porter-Jones, Sharon Schroeter (Rising Star producer) and Kimala Bennett for their work in various aspects of media; Tara Playfair-Scott for her work in communications and marketing; former Jamaica senior netball captain, Simone Forbes, who has represented Jamaica in five different sports; 17-y-o violinist Jessica Yap, for her musical achievements; and Dr Carolyn Gomes, for her outstanding and ongoing work in human rights advocacy.

Miller said the programme will also feature the Lady Geeta Trophy grade one race over 1200 metres, as well as a Gimmick Race on which betting will be conducted.