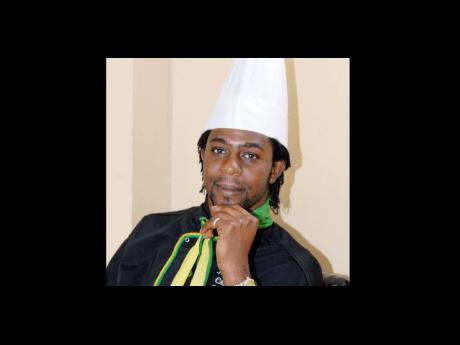 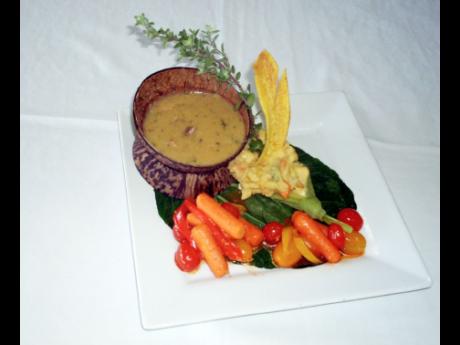 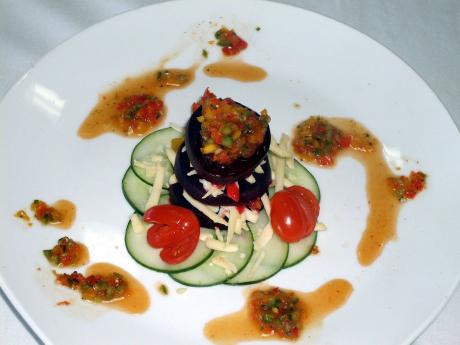 Douglas' salsa with beet and cucumber. 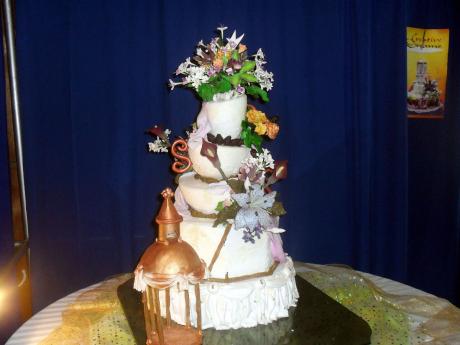 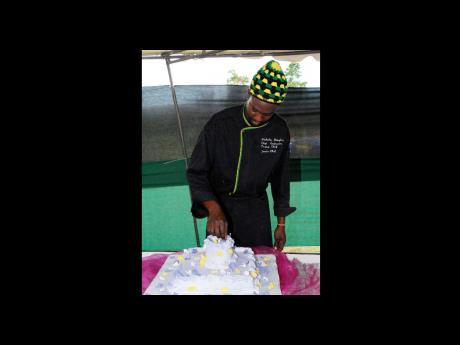 Douglas during one of his many demos. 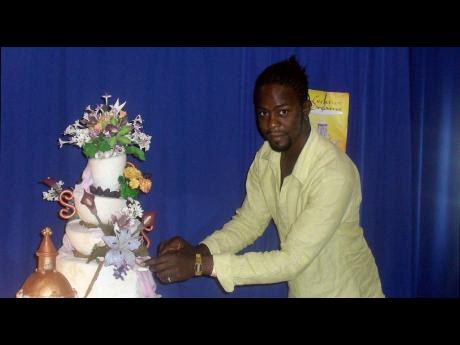 Douglas adding the finishing touches to his masterpiece.
1
2
3
4
5
6

At 24, Nicholas Douglas is on his way to become the Caribbean and Jamaica's first master chef. The trained sous-chef was born into food with it's ingrained in his DNA. His father was a cook who operated two restaurants and his mother was always baking puddings. He knew this was his path from the age of eight but he still had a backup plan.

"If I never made it into food, then I would go into fashion design," he told The Gleaner recently. Now, he fuses the two which is evident in his cake, Harmony, which was on show at the recent Jamaica Pegasus hotel's wedding expo. The creation took over 200 hours to complete.

With an associate degree from Western Hospitality Institute in Montego Bay, Douglas was also trained in Italian cuisine when he went to Italy in 2005. He has also studied at Professional Development Institute (formerly Girls Town) to complete.

Every aspect of Douglas's life is immersed in food. "It doesn't feel like work," he said. He is currently in the process of publishing his first cookbook which will focus on using Jamaican produce. However, home-economics students, teachers and community groups are getting a preview of this publication as he is currently travelling around the island with the Jamaica Cultural Development Corporation teaching persons how to use Jamaican produce (with a little international flair), "eating what we grow," he emphasised.

Douglas has entered numerous competitions with the organisation since 2002 in all categories starting as an amateur chef. "I was born to compete. Competition is good because it shows you where you are compared with other chefs. If you are beaten in this competition, you won't be beaten in the next." It was winning a competition in the Sugar Federation of Jamaica's Cake extravaganza that he got the scholarship to Western Hospitality Institute.

Douglas has started his own company, Creative Designs, focusing on every aspect of food, including sugar art that he was introduced to by former teacher, Marva Thompson. "I don't plan to limit myself," he noted.

Douglas plans to continue his studies abroad next year to return not only well on his way to being a master in his craft, but passing on his knowledge to future chefs.