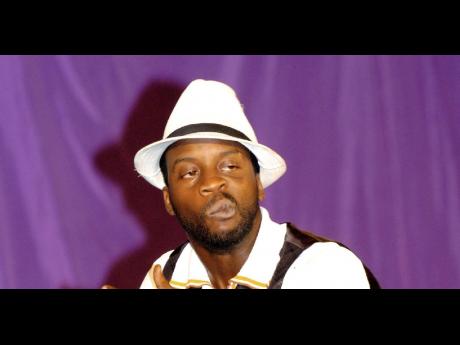 Christopher 'Johnny' Daley in action at the Comedy Dons Show, held at Backyaad, Constant Spring Road, on Sunday, April 4. Daley said he intends to do the one-man show on a

Christopher 'Johnny' Daley is into the seventh week of his 13-show RAW series at the Village Blues Bar, Liguanea, St Andrew. He explains that the concept, developed specifically for the space, is a two-hour package with "some comedy, some social commentary ... it is obviously for adults only, with an open mind".

Although his name is standard on the banner, Daley has guests every Wednesday, MR G, LA Lewis, Elva, Dr Michael Abrahams, Bad Boy Trevor, Fae Ellington, Anthony Malvo and Leighton Smith among those who have put in an appearance so far. However, there will be a time in the not-so-distant future when not only will his name be on the marquee by itself, but he will also be onstage by himself for the duration of the show.

Daley explained that "this is building to my one-man show", slated to be done along with Imagine Dat Entertainment. Daley said that he has been developing towards the one-man show for about four years and said "I have done one-man performances in recent times that have boosted my confidence".

Among those were an 80-minute showing in Pennsylvania, USA, a lengthy performance in St Kitts and extended showings on home soil. Daley pointed out that when he does private functions, there is often room to develop material on the spot and points to US comic Shang's Easter Sunday performance at Comedy Dons, held at Backyaad on Constant Spring Road. Shang interacted extensively with a few members of the audience seated close to the stage, provoking reactions that got them involved in the performance. Daley said "in Jamaica, we can easily do that ... we can do that, quick on your feet".

Daley said that the one-man show is more in demand overseas and for his own, "I am trying to do one that will appeal to my base - and my base is very wide. People who like the actor might want to come, they will get the characterisations," Daley said, adding that he can go into character and do many roles. "Then there are those who know me as the stand-up comic. Then there are the Cash Pot people, who know me as the star," he said. Whatever his existing fan base is, Daley plans to expand it, stating that he intends to do the one-man show on a "global level - and one that, if captured properly, can appeal to the world".

'Captured properly' is a critical factor, as "the idea is to do no more than two or three performances and capture each one", Daley speculating on Kingston and Montego Bay shows.

"I plan to make it exciting and capture it at the same time," he said. "One man, one night, one microphone."

Christopher 'Johnny' Daley in action at the Comedy Dons Show, held at Backyaad, Constant Spring Road, on Sunday, April 4. Daley said he intends to do the one-man show on a "global level". - Winston Sill/Freelance Photographer