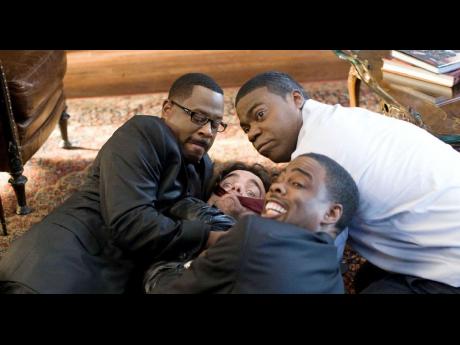 The original Death at a Funeral only came out about three years ago, so it may seem a bit soon to resurrect it. But director Neil LaBute and an all-star cast surprisingly breathe new life into the material.

The British farce about an extended family coming together for a funeral, with elaborate hijinks ensuing, debuted in 2007 to mixed reviews and minimal box office. The main problem with director Franz Oz's film was that it was all over the place in tone - veering between dry wit, scatological slapstick and sticky sentimentality - with dull sections that dragged in-between.

This new Death at a Funeral works better because at least it knows what it is. LaBute just goes for it, playing up the wilder elements of the story, of which there are plenty. And the hugely talented comic cast, led by Chris Rock, Martin Lawrence and Tracy Morgan, is definitely up for such raunchy physicality.

Now, LaBute would seem an odd choice for a family comedy, having made his name with far darker, crueller humour in movies like In the Company of Men and The Shape of Things. (He also directed Rock a decade ago in Nurse Betty.) But perhaps the twisted elements of the story appealed to him, including hallucinogenic drugs, a profane grandpa and a gay midget lover.

Writer Dean Craig tweaks his own script for this nearly verbatim remake - it's only a minute longer in running time - from chunks of dialogue to wardrobe details like a character answering the door sans pants.

But the setting this time is the Los Angeles home of an upscale black family that's lost its patriarch. Eldest son Aaron (Rock, who's also one of the producers) just wants a dignified ceremony, but signals trouble early when he looks inside the coffin and finds that the perfectly embalmed, peaceful-looking man lying there is not his father.

Aaron's wife, Michelle (Regina Hall), doesn't help matters by reminding him she's ovulating and demanding he do something about it; his mother (Loretta Devine) is also nagging him about giving her a grandchild, when she's not bragging about Aaron's younger brother, the successful author Ryan (Lawrence).

Once the right corpse arrives, the other relatives and friends who show up to pay their respects include cousin Elaine (Zoe Saldana) and her boyfriend, Oscar (James Marsden), whom her father doesn't approve of; Norman (Morgan) and his buddy Derek (Luke Wilson), who's still pursuing Elaine after a brief fling; and cantankerous Uncle Russell (Danny Glover), barking orders from his wheelchair.

The elderly uncle character provides the same graphic bathroom scene as in the original, which is just as unnecessary now as it was then; Death at a Funeral is at its most appealing when it's daring and a little bit kinky, and doesn't need to appeal to the lowest common denominator in this manner.

The main stars function solidly as the personae we've come to know and appreciate; no one's working outside his comfort zone. Rock is incredulous at the absurdity of it all, Lawrence is the smooth talker and Morgan is just ... Morgan. He opens his mouth and adds an irresistible weirdness to any situation. Marsden takes the role Alan Tudyk played so well in the original - that of an unsuspecting schmo who goes on a bad drug trip when he swallows a pill he believes is Valium - and pretty much does the exact same thing. But it's a showy, can't-miss part, so there's no need to mess with it too much.

And of course, the key figure connecting both movies is Peter Dinklage, reprising his role as a diminutive man who shows up at the house with a big secret - and even bigger demands. His return is a prime reason why Death at a Funeral surprisingly deserves a second life.

Death at a Funeral, a Sony Screen Gems release, is rated R for language, drug content and some sexual humour. Running time: 92 minutes. Two and a half stars out of four.