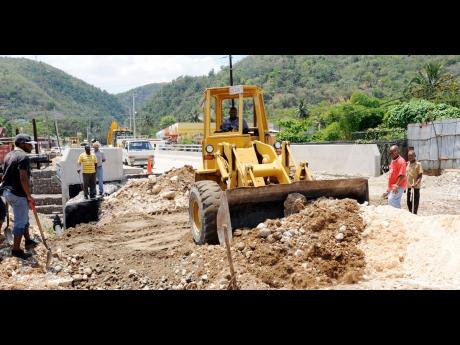 A tractor removes dirt adjacent to the newly constructed bridge in Bog Walk, St Catherine, that is slated to be opened at the end of this month. 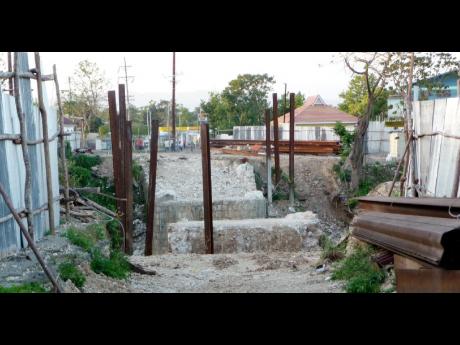 The Bog Walk bridge on one of the occasions when work had ceased because of contractual issues. - Photos by Rasbert Turner
1
2

A number of persons who had to do without the Bog Walk Bridge in St Catherine are now pleased its reconstruction is almost complete.

In a recent interview, director of customer services at the National Works Agency, Stephen Shaw, said the bridge, which has had its construction delayed as the contractor hired to do the job was changed, is 92 per cent complete and would be open by month's end.

He said the bridge, which, should have been completed more than one year ago, is only waiting to be made level with the roads it joins.

Meanwhile, motorists, especially those who ply the Bog Walk to Spanish Town route, told The Gleaner they were happy the bridge was almost done. This would help to ease the high operational cost.

"Imagine that you are taking someone to the nearby Bog Walk High School. You have to drive all the way to Church Road to the school, almost twice the journey,'' Marcus Jones, a taxi operator said.

The views of Jones were replicated by others who spoke about the negative impact the bridge's absence had on their lives.

"Since the closure of the bridge two years ago, it is the mercy of God that keeps us in business, so the completion must help to bring some level of normalcy to the businesses in Bog Walk, especially," a businessman said.

Police personnel at the nearby Bog walk station said the bridge 's closure hampered their fight against crime, as it took more time to respond to requests.

In late 2008, the National Works Agency ordered the bridge, which goes over the Rio Cobre, repaired as it could no longer be used for vehicular traffic.