Waterhouse to play in Bahamas for Haiti relief 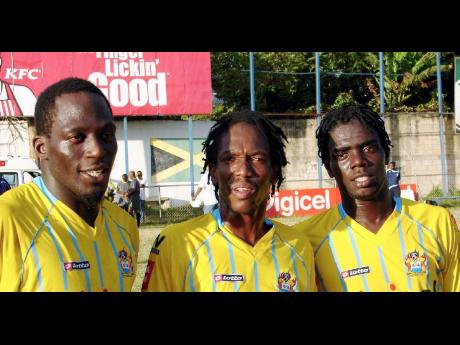 Waterhouse trio Kevin Lamey, Jonathan Williams (centre) and Kenardo Forbes (right) stand together following a Digicel Premier League football match at Waterhouse Football Stadium. The trio will leave with their team for a benefit football match for Haiti, which will be held in The Bahamas on Sunday. - Contributed

FORMER Premier League champions, Waterhouse Football Club (WFC), will be putting in a shift to aid their neighbours in earthquake-ravaged Haiti, when they tackle a Haitian All-Stars team in a benefit match in Nassau, Bahamas, on Sunday.

"It's symbolic that Jamaica and Waterhouse are involved in this effort," said Bruce Bicknell, chairman of WFC.

They are scheduled to leave the island tomorrow, for the match that will be played at the Queen Elizabeth Sports Centre.

Bicknell says the project, to raise funds for relief efforts in Haiti, is the brainchild of Jeff Rodgers, who has partnered with Tank-Weld Metals to stage two basketball clinics for inner-city kids in Jamaica.

"He made contact with us to have this event to aid our brothers and sisters in Haiti," Bicknell pointed out. "They're projecting 8,000-10,000 spectators."

Rodgers said: "I have always considered Jamaica as my second home and I saw this as an opportunity to partner with my brothers to raise money for our family members in Haiti."

The Broadcasting Corporation of The Bahamas and the United Association of Haitians in The Bahamas are also major players on the team that has brought the relief project to fruition.

Clash of the Titans

The match, which is sanctioned by the Jamaica Football Federation, Premier League Clubs Association and The Bahamas Football Association, will be aired live on the National Voice 1540 AM, which can be picked up in Jamaica and Central Florida. ZNS TV 13 will also air the game in its entirety on the day following the match, Monday, when the WFC contingent is due to return home.

The match is being dubbed 'Clash of the Titans' and WFC club president Ricky Chin noted in a release that his organisation extended itself fully to contribute to the humanitarian effort.

"The club's management made every effort to ensure that WFC could capitalise on this golden opportunity," he was quoted as saying. "Not only does the team get additional exposure and practice, but the club, and by extension the community, will make a tangible contribution to the plight of our Caribbean neighbours through the donation of the proceeds of the game to the Haiti Relief Fund.

"This was really the driving force behind our acceptance of this invitation and we were pleased by the team's response and support of the venture," Chin added.

The French-speaking territory was ravaged by a massive earthquake on January 12, which killed more than 100,000 people. It also left thousands of homes damaged, leaving many homeless.

The Haitians number among four Caribbean countries to have qualified for the FIFA World Cup Finals and their playing standard is pretty high. The Haitian All-Star team has been campaigning together for some time and includes some of the country's top footballers.

Waterhouse, the two-time national champions who now lie third in the Digicel Premier League, also have some of Jamaica's most talented players, and according to Bicknell, they won't be taking their opponents lightly.

"The players are excited about going to contribute to the Haitian cause, but they will be taking the match seriously because the Haitians have a history of having strong teams," Bicknell said.

The Waterhouse delegation is: