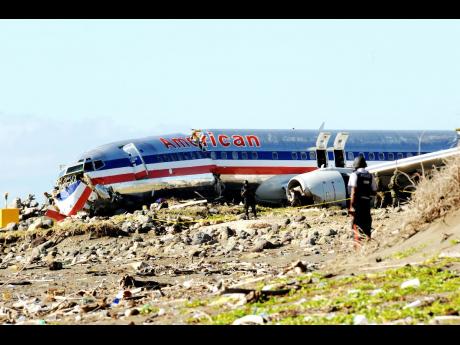 Police guard the wreckage of American Airlines flight 331 near the seaside above the Port Royal main road in Kingston before it was moved to a hangar at the Norman Manley International Airport in December. - file

One of those areas, according to director general of the Jamaica Civil Aviation Authority (JCAA), Lt Col Oscar Derby, is the airworthiness of the Boeing 737-800 aircraft.

The other areas being closely scrutinised are the performance of the aircraft prior to the crash, flight operations and cabin-safety measures, which the JCAA head described as one of the positives from the accident.

"There are a number of things we are gathering data on like why it (the aircraft) floated so far down the runway before touchdown," he explained.

This development comes even as the United States-based airline is refusing to confirm whether the pilots involved in the accident have resumed flying.

"I can't confirm or deny that because we have privacy policies that govern our interactions with our personnel," said AA spokesman Tim Wagner when contacted.

"I know that isn't particularly helpful to journalists, but it is our policy to protect our employees' privacy."

In what has been labelled the 'Miracle at Christmas', flight 331 landed halfway down the runway at the Norman Manley International Airport then careened through a perimeter fence. The airplane skidded across the Port Royal main road, coming to a stop some 40 metres from the sea.

The accident left 92 of the 148 passengers on board with mostly minor injuries.

Derby told The Gleaner yesterday that his investigators have "no issues" with the toxicology tests on the pilots.

"No concerns have been raised about that," he assured.

More than 20 victims of the accident have retained the services of two US-based aviation attorneys to file suit against AA.

The JCAA head reiterated that it could take months before a draft report on the accident is ready.