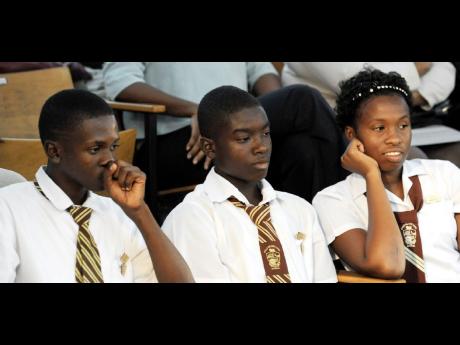 Students from Haile Selassie High School in Kingston have their eyes glued on Opposition Leader Portia Simpson Miller as she makes her contribution to the 2010-2011 Budget Debate in Gordon House yesterday. - Norman Grindley/Chief Photographer

The 2010-2011 Budget Debate made a humorous return to the political campaign ahead of the 2007 general election with Opposition Leader Portia Simpson Miller telling Parliament that she is bracing for a call from 'Farmer Joe'.

"I am expecting that he will call and say, 'Sister P, me and mi neighbour a suffer under Labour'," Simpson Miller said, in reference to the character created for one of the most memorable Jamaica Labour Party (JLP) advertisements from the campaign.

Even government members embraced Simpson Miller's good humour, with Prime Minister Bruce Golding retorting, "I saw him last week and that's not what he said to me."

Farmer Joe is a fictional portrayal of Jamaica's farmers. In the advertisement, he responds to a phone call from Simpson Miller, telling her she cannot manage the job of prime minister and that he would vote for the JLP.

Yesterday, Minister of Labour and Social Security Pearnel Charles quipped that Farmer Joe would not be calling Simpson Miller because he can no longer afford to buy phonecards.

The House of Representatives erupted in laughter at Charles' comment. Finance Minister Audley Shaw, however, told the labour minister to "watch yuh mouth" before he himself chuckled.