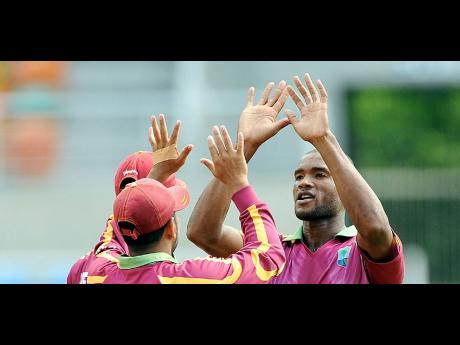 Play was disrupted for a hour, six overs into the West Indies' reply. In a revised target the regional team was asked to score 213 runs in 45 overs to secure the win.

The West Indies achieved victory for the loss of four wickets in the 44th over in response to Ireland's 219 all out, despite some nervous moments throughout the contest.

West Indies coach Ottis Gibson was contented with the overall performance but was particularly pleased with the displays of Sarwan and Narsingh Deonarine.

"It was a good performance. I thought we started quite well and then chasing a score like we did is always going to be tricky. We lost a few wickets early on but Sarwan played well to get a brilliant hundred to win us the game," said Gibson. "It was good to see Deonarine coming in and once again getting among the runs. He is obviously a player in form and he is showing that."

Ireland captain William Porterfield called for improvement from his team.

"We played pretty well but there are a few areas that we can improve on," said Porterfield. "But I thought the way we came out and fought with the ball was a good sign. We started very well but Sarwan's knock was a pretty good one and it basically took the game away for us." Sarwan helped himself to an even unbeaten 100 to power the West Indies to their fourth straight victory in the series and his fourth ODI ton, while sharing a 111-run partnership with the in-form Deonarine, who made 57 runs off 49 balls.

Batting first after winning the toss, Ireland got 219 all out.

Kevin O'Brien was the chief run-getter, playing his way to a nicely paced 54 runs off 51 balls before his stumps were disturbed by pacer Ravi Rampaul towards the end of the innings.

O'Brien, who had brought up his half century in stylish fashion, with a fierce pull that went over the midwicket boundary, went for one shot too many and was bowled by Rampaul with the last ball of his ninth over.

Ireland had found themselves in trouble as early as the fourth over when captain William Porterfield was caught by his counterpart Darren Sammy off the bowling of David Bernard Jr for 10 with the score on 16. The experienced Andre Botha (9) was next to go in similar circumstances to leave the visitors on two for 52.

Niall O'Brien supported his brother well and just missed out on his eighth one-day international half ton, falling to spinner Nikita Miller for 49.

West Indies also struggled early, losing their first two wickets with only one run on the board. Chanderpaul fell for no score and Andre Fletcher (1) after two overs.

Wavell Hinds helped to halt the slide, getting 20 before debutant George Dockrell managed to hold on to a fiercely struck off drive to remove the Jamaican with the West Indis score on 56.

The Irish stifled the West Indies batsmen for a few overs as the regional team struggled to penetrate the Irish fielders before Sarwan signalled his intentions by removing the shackles in the 14th over, stroking two perfectly timed drives down the ground to the long off and long on boundaries in an over that cost the Irish 15 runs.