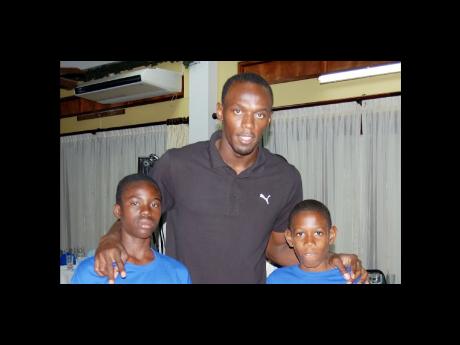 World 100 and 200 metres record holder, Usain Bolt, with Max Ingram (left) and Joel Gibbson of the Alpha Boys Home, at a special luncheon held at the Alhambra Inn on Wednesday. - Contributed

Thirty-two boys selected from five boys' homes across the island will be special guests of Usain Bolt at the May 1 Jamaica Invitational International meet.

The boys were greeted with the news at a special luncheon at the Alhambra Inn on Wednesday. It's all a part of an overall mentorship programme by Bolt, whose projects for the boys will be managed through the United Way of Jamaica.

"This is just the first gesture I will be doing for the young men as I try to reach out to the wider community," Bolt said.

He added that "some of the boys have been abandoned, and some of the times when they are down, they need someone to motivate them and show them hope for the future".

During lunch, the boys were also treated to brief discussions on mentorship, finance, image, spiritual growth and a general talk from the world 100 metres and 200 metre record holder.

Also in attendance were representatives from the Child Development Agency (CDA). Audrey Budhi, director, policy planning and evaluation at the CDA, applauded the gesture, as she thinks it provides a great opportunity for them as they begin to make decisions about lifelong dreams. The boys who are 11-17 years old were given autograph cards (new Puma cards with Bolt's photograph).