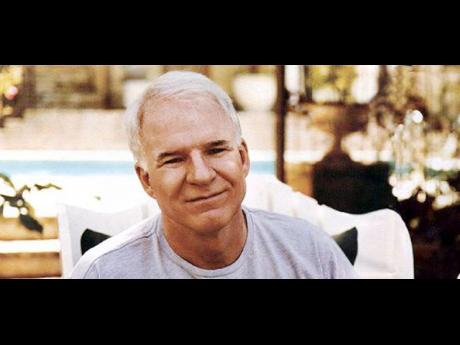 With no introduction or celebrity fanfare, Steve Martin steps onstage with the Steep Canyon Rangers bluegrass band, a banjo strapped to his chest.

He's not there to tell jokes, though he manages to squeeze in a few. He's there to play music - songs from his Grammy-winning bluegrass album, The Crow: New Songs for the Five-String Banjo.

Martin tells the crowd he met the band at a party in North Carolina, "But when we're in California, I tell people we met in rehab."

With that, he begins to play, with such conviction and skill that he's clearly not joking. A banjo player for 45 years, Martin says he wrote every song in the hourlong set, just as he did all 15 tracks on his album, which spent a year atop Billboard's bluegrass charts. He toured the country playing banjo last year and is embarking on a second nationwide tour on April 19. The Steep Canyon Rangers serve as his backup band.

The 64-year-old actor-writer-musician says he fell in love with the banjo the first time he heard it during the 1960s folk-music craze.

"It was just the sound of it," Martin said in an interview before taking the stage. "It was like my ears were trying to part away the other instruments and focus on what is that instrument, and I've always loved it."

He told the audience inside the 250-seat Largo theatre that he appreciates the banjo's "elements of sadness and melancholy - like the expression on my agent's face when I told him I wanted to do a banjo tour".

When Martin talks about music with a reporter, though, there are no jokes. He approaches the subject with the same earnestness and focus that he does his writing and acting projects, pausing intermittently to pick away on the banjo in his lap.

After spending two months on the road with the Steep Canyon Rangers last year and winning a Grammy in January, Martin has become an accidental ambassador for the banjo and bluegrass music.

He speculates that only half the crowd at any of his concerts are there for the bluegrass and banjo music, "but they all go away very happy".

"Steve's notoriety as a person, as a comedian, as an actor, I think is really wonderful for bluegrass music," Platt says. "We're a niche market and we need as many things as we can get to broaden the spectrum of listeners."

While Martin plans to keep up with writing (he has a novel coming out in November) and acting (his next film is The Big Year with Jack Black and Owen Wilson), it seems his heart is in his music.

"I like it all, but I'm finding that certainly music introduces me to a whole new group of people that I really, really like," he says. "It uses another part of my brain and it's just another experience for me, another discipline that's really fun and unusual."

Touring is nothing new for Martin, who used to play the stand-up circuit. But playing music on the road is different from telling jokes.

"I much prefer playing music," Martin says. "Because comedy, you're onstage, it never stops. It never stops being worrying. But a song lasts three minutes."

And it's "comforting" to look out into the crowd and see people happily humming along to the music, Martin says.

His latest tour begins in Detroit and includes stops at the New Orleans Jazz Fest and the Bonnaroo Music Festival in Tennessee. He's also planning to pen a second banjo album.

Just as he can't keep comedy out of his concerts, a laugh or two might also sneak on to the new album.

"I'm going to write a song called Women Like to Slow Dance," Martin says, "but we're going to make it really fast."

Back onstage at Largo, Martin keeps the crowd smiling with his special mix of finger-picked five-string comedy.

"I try to write songs based on personal experience," he says. "This next one is called I Think My Masseuse is Too Chatty."