Britons like Jamaican school system, but say behaviour needs to be checked 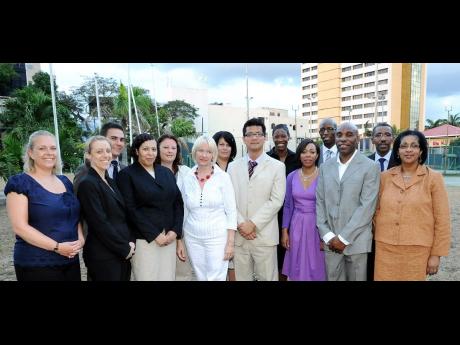 A group of educators from the United Kingdom who were in the island to observe teaching strategies in the Jamaican education system.- Norman Grindley/Chief Photographer

A group of British educators has praised the Jamaican school system but said more work needed to be done to address behavioural problems here.

Ark Academy network of schools, which was on a seven-day visit to the island, was here to observe the delivery patterns in Jamaican classrooms with the aim of developing strategies to improve its own education system.

Bonita Holland, a member of the delegation, said the group was working assiduously to perk up the English education system by addressing the challenges that are hindering progress.

"We are here to look at how the Jamaican education system is improving the lives of children by maximising their future potential opportunity, because in our schools it is a very multicultural place and so we do have the challenge of trying to help all these children from around the world in our schools to be successful," she told The Gleaner recently.

Holland said the Jamaican experience would assist in laying a template for teaching Jamaican expatriates in British schools.

Among the issues explored were strategies to improve literacy and numeracy, as well as addressing perceived lack of interest among students.

"We have already seen some fantastic practices which excite us, and I know when we go back to England we will share these ideas with our colleagues so that they could use the strategies," she added.

But Holland noted that the lack of discipline displayed by some of the island's students was cause for great concern.

She said while the introduction of deans of discipline in schools was a move in the right direction, more was needed to reverse student delinquency.

In an attempt to stamp out violence in schools, the Ministry of Education has, since last September, deployed deans of discipline to several secondary schools across the island.

The British delegation also suggested that Jamaica seek to forge strong partnerships with the business sector.

"Gone are the days when you can depend solely on Government, so ... if the Jamaican system is thinking about how else they can boost the learning in children for the 21st century, they need the support from businesses.

"The different entities also need to realise that they have a part to play in the children's development," another member, Devon Hanson, said.