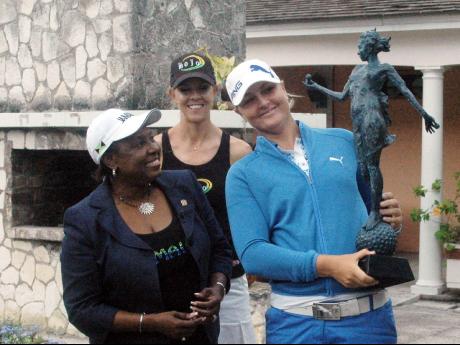 Anna Nordqvist of Sweden created history at the Cinnamon Hill Golf Course in Montego Bay yesterday when she won the inaugural staging of the US$1 million Mojo6 Raceway Golf Championship.

In an intriguing final against Amanda Blumenherst, the tall 22-year-old fired in a 69-foot eagle on the second hole of the six-hole championship showdown to establish an early lead; and she remained in front all the way through to walk away with the title.

"I am having goose bumps ... this is just fantastic," said an elated Nordqvist, moments after punching the air in triumph. "This is a memorable experience and I am already looking forward to coming back here next year."

Beaten finalist Blumenherst, who shared a three-way lead with Christina Kim and Na Yeon Choi at the end of the first day of the two-day championship, was quite gracious in defeat and hailed the 69-foot eagle shot by her opponent as an amazing shot.

"I played well but that eagle was really a fabulous putt," said Blumenherst. "The conditions were quite challenging in the latter stages but I can't complain because it was challenging for every one."

Like the final, the third place play-off between Choi and Christie Kerr was quite awesome as it took three sudden death play-offs to separate the determined combatants. In the end Kerr prevailed, leaving the gallant Choi in fourth.

The final day, which started with the eight survivors from the first round squaring off for places in the semi-final, was quite intriguing and exciting as the matches were fiercely contested.

In the semi-finals, Choi had a one-hole lead with one to play. But as she let it slip, Blumenherst won the last hole to force the play-off, which she subsequently won; while in the semi-final against Kerr, Nordqvist trailed by one-hole going into the final hole, but she managed a birdie to square the match, sending it into a play-off. In the play-off, Kerr's birdie attempt spun out of the cup, while Nordqvist sank he shot.

"It was a fantastic experience and we are all elated," said Mojo6 president Joy Stephenson. "It was a wonder idea that worked and we are looking forward to doing it again."