The Guv will rule 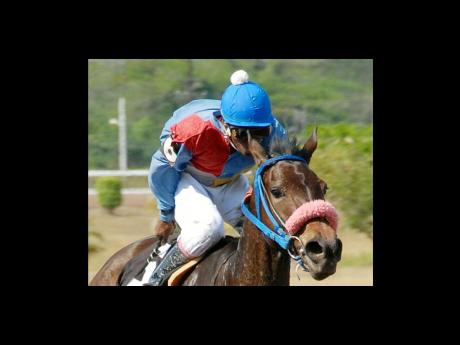 Lady Gorakhpur, one of four winners for apprentice Aaron Chatrie, wins the fourth race over 1400 metres for four-year-olds and up, at Caymanas Park on Wednesday, this at odds of 9-5. - Colin Hamilton/Freelance Photographer

Eight horses are down to contest the 3-y-o and up open allowance race over 1500 metres for the Fontainbleu Trophy at Caymanas Park today, four of them winners last time out.

They are THE GUV, HAIL THE GENIUS, STAR OF THE SEA and HEART OF GOLD, all trained to the minute and ready to rumble.

However, the race is not necessarily confined to that quartet as others such as SHANGHAI PASS and 2007 Derby winner, THE BOMBER should complicate matters.

THE GUV, an impressive fast-time winner on March 13, steps up in class in a bid for the hat-trick and judging from the improvement shown this season, he will not go down easily, even in the face of stiff competition.

Trained by Spencer Chung, whose stable is enjoying good form, the 4-y-o grey colt by Royal Minister out of Havasac,came through early in the straight to beat SKITTLE QUEEN by 2 3/4 lengths over 1400 metres when last raced, covering the distance in the smart time of 1:25.0.

THE GUV had previously won over 1200 metres in a fast 1:12.1 on February 13 and back in action, with only 51.0kg for the services of title-chasing jockey Paul 'Country' Francis, looks the one to beat.

Still, he faces some really tough opponents in the stable companions HAIL THE GENIUS and SHANGHAI PASS, both trained by Gary Subratie, as well as THE BOMBER and the Wayne DaCosta-trained HEART OF GOLD, who like THE GUV, bids for a hat-trick of wins.

The American horse SHANGHAI PASS ran well in defeat over the straight last Saturday, finishing two lengths fourth to BRASH & SASSY under top weight. Now better for that run and eased in the weights, SHANGHAI PASS is sure to make a brave bid, with top apprentice Doushane Gordon aboard.

Knocking at the door

The same is true of the 2007 Derby winner, THE BOMBER, who has been knocking at the door in recent months. But it is the stretch-running HAIL THE GENIUS who looks best equipped to carry the fight to THE GUV, having beaten a good field over 1200 metres (finishing fast) on March 24.

In that race, HAIL THE GENIUS got up in the nick of time to beat FOREVER MINE and subsequent winner BRASH & SASSY.

In-form 3.0kg claiming apprentice, Aaron Chatrie, again has the ride, but I suspect HAIL THE GENIUS will play second fiddle to THE GUV, who should dispose of rivals leaving the furlong pole.

Other firm fancies on the card are SKITTLE QUEEN in the first race; stable companion MOMENT OF HOPE in the third; FLAGAMAN in the fourth; PRINCE ROHAN in the sixth; and POWER GLITZ in the closing straight five race for $180,000 claimers.