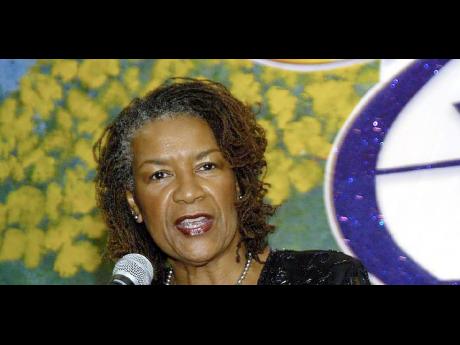 Dr Blossom O'Meally-Nelson's presentation last Monday afternoon of Heart Song: Poems of my Transformation, at the CHASE Fund's New Kingston offices served a dual purpose. One was obviously an opportunity for O'Meally-Nelson to express her gratitude to CHASE for supporting the publication. The other was for her to express what her brief pre-presentation address described as "a fully gratifying sense of achievement".

Heart Song, a hardcover, full-colour publication with illustrations by Christopher Gonzalez and Judith Salmon, is divided into the sections 'Eros' and 'Bios'. O'Meally-Nelson said 'Eros' holds the poems of the heart and depicts a type of rationalisation of all the emotions and feelings that come with understanding the nature and purpose of relationships. 'Bios' is more outward-looking, taking in the changing role of the woman, concerns for the environment, the love of nature and the meaning of life itself. The poems were written over two decades.

Among the 'Eros' poems are 'You Come to Me', 'Conversation', 'The Call' and 'Memories of Lost Love', while 'Birthday Thoughts', 'On the Death of a Father', 'A View of the UWI Campus' and 'Soft Velvet Hills' find their place in 'Bios'.

Mitchell said the proposal for the book had been "quite a refreshing one". "We have supported over 40 books of various types. This book of poems, we think, is a very important addition," Mitchell said.

O'Meally-Nelson read 'Dusk', 'Soft Velvet Hills' and 'Woman of the Forest' to close off the launch, in the process speaking about the places and times where the poems were written (the last came on a trip to Kaieteur Falls in Guyana, 'Dusk' came to her while driving from Montego Bay and 'Soft Velvet Hills' hit her driving up to Sligoville and looking over the plains). Delving into her writing process with The Sunday Gleaner, O'Meally-Nelson said "something starts going around in your head. For me it is just a phrase and I build on the phrase." The phrase can be sparked by an event. rewrites and editing are minimal, with hardly any changes in the words. "It is not crafted and crafted," O'Meally-Nelson said.

"I like to say my poems have an internal rhythm. If you do not have it you are just reading a 'thing'. They have a cadence."

In grounding her poetry, O'Meally-Nelson said "I think I tend to relate everything back to the earth, to life, to the totality of the experience. It begins with nature. I love nature," she said, adding that her knowledge of geology makes her think about not only what she can see on the surface but what is underneath.

The last poem in Heart Song, written while she was in the Turks and Caicos Islands, is in the epilogue and comes from a situation where an airstrip was built in a nature enclave. O'Meally-Nelson writes:

"Yet the sounds of life are strangely absent

The insulting drone of aircraft busy with its human cargo

The formal process of putting the poems together began in 1994, but although she had a mock-up five years ago, the impetus to complete the publication came from the death of Gonzalez and the book is actually dedicated to him. O'Meally-Nelson placed her personal journey, the 'transformation' at a post-divorce beginning and an ending point 'beyond'. That 'beyond' is "a deep appreciation of the meaning of charity and service and the oneness and the totality of life".

And she defines charity as not only love and understanding, but "giving to the other person, even when they don't deserve it, you are there for them".

"I am glad for the place I have reached spiritually, being able to help others from a place of knowing and understanding. We have to get to a larger place. Most of us are looking to go to a smaller place," O'Meally-Nelson said.