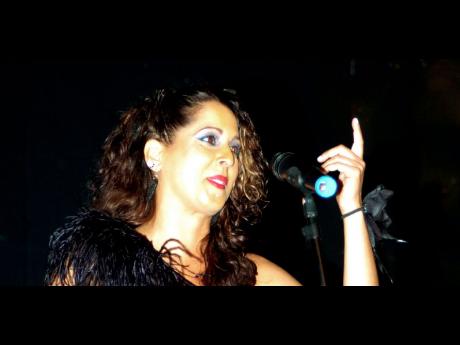 Nadia Khan lost a couple things doing The Love List. A toenail. Some skin from her left knee. Almost her footing, as a fragile kitchen counter shuddered underneath her in a performance on the road.

But she got something, apart from the sheer joy of being on-stage, a very good script ("from the start I did not want to put down the script, which is great") and regular encounters with Clive Duncan's lips (which she joked about at the 20th Actor Boy Awards). Khan was named 'Best Actress in a Lead Role' at the 2010 Actor Boy ceremony, held in late March at the Courtleigh Auditorium, New Kingston.

She tells The Sunday Gleaner that when her name was announced "my first thought was 'thank you God'. I worked hard on that role. It wasn't only that; I worked hard behind the scenes as well." The director fell ill when The Love List opened and she pounded the pavement promoting the play.

She had worked with Pablo Hoilett previously and says he has a knack for finding plays and adapting them (The Love List is written by Norm Foster) and from the first meeting with Duncan and Munair Zacca, there was progress.

Then, during the run, she says, "We were really three kids in a sandbox, having a blast on stage every night."

She did not anticipate winning and says, "The nomination is worth more than the award. The award is there, it will always be there. It is achieving the nomination. Somebody is looking at your work, enjoying your work." Then there was the sheer numerical probability of 'Nadia Khan' being on the slip of paper slipped from the envelope, as Nadine Rawlins had two nominations in the category.

At the end of it all, Khan says she felt relieved, what with the wait between nominations and the awards ceremony. However, (and her voice deepens), she says "I hate giving speeches."

In The Love List she plays Justine, the apparently ideal mate composed from a list of preferred qualities. The rub is that it's those qualities which start to rub the wrong way and, when Justine discovers the list, she counters with one of her own.

Working hard on a role is par for the course for a self-admitted intensely competitive Khan. "All roles are challenging. You try to outdo yourself. I have a challenging nature. I want to outdo me. How can I do something different?" Khan said. Still, 'Justine' was not her most challenging role. That nod goes to the madwoman Bertha in After Mrs Rochester, for which Khan won an Actor Boy Award for Best Actress in a Supporting Role. She says that it was not only emotionally but also physically demanding. Plus, "it was to keep that madness and not let it affect you. And maintain that throughout the play."

Nadia Khan does not restrict her acting to the designated stage. She does not smile as she says, "I act every day ... Even in developing roles I play around with it, how you can alter (vocal) tone, pitch, how you walk, your habits." And she does not have to co-opt co-actors in her day-to-day life; Khan can do those rehearsals and experimentations alone.

Then there are the roles she borrows from offstage experiences to play. So some of Khan's hearing-impaired maternal grandmother's characteristics were used in her first Jamaican production, Dirty Diana, where she played the deaf go-go dancer Cher. It was a flying start for Khan, who got a Best Actress in a Supporting Role nomination. "I was very encouraged. Nobody knew me," she said. She makes it clear that her theatre journey has not been an easy road.

Then there was the woman who came up to her in Azan's and said, "You can talk!" On the touching, but tearful side, was the couple who came backstage one night, the wife saying that in all her years of marriage she had never seen her husband cry but that performance brought on the tears.

"It is good that I could leave that lasting impression, that I could take your breath away and entertain you," Khan says. "There is nothing like live entertainment and that covers music, theatre, poetry etc. You can allow yourself to be transported even more with a live presentation than film."

And that would seem to go for not only audience but also performer, as Khan says the theatre is "like the air I breathe."

She will be inhaling more of that heady intangible on Mother's Day, when the University Players open the Barbara Gloudon-penned Appropriate Behaviour. Khan has also been approached to do Against His Will in August, this after The Love List is remounted in June at the Theatre Place, New Kingston, with the possibility of MoBay and overseas stints.

Then Nadia Khan takes a deep breath and says, "I'm free after that."