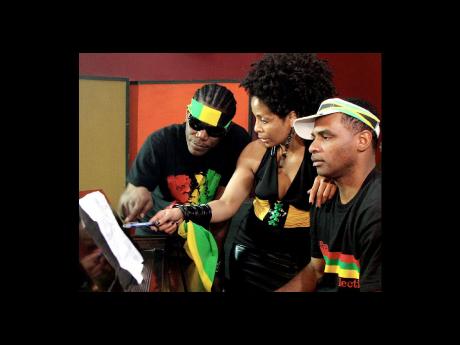 From left: DJ Lushy Banton and singers Sheila Hylton and Elvis D sit around the grand piano rehearsing 'Black, Gold and Green' on the set of the music video recently. The song which was written and recorded in less than 24 hours celebrates the astonishing prowess and the accomplishments of Jamaican athletes worldwide. - Photo by Roland Hyde

When Jamaican athletes compete at next week's Penn Relays in Philadelphia, they will be accompanied by a theme song produced by long-time supporters Team Jamaica Bickle.

Black, Gold and Green (To The World) is the title of the song which features New York-based Jamaican acts Sheila Hylton, Elvis D and Lushy Banton.

Dave Rodney, a Jamaican marketing executive, is one of the persons behind Black, Gold and Green. He is also a member of Team Jamaica Bickle.

He told The Sunday Gleaner that the song is a tribute to Jamaican athletics.

"This has been on the radar of my business partner Anthony Turner and myself for a while, as we are both aware of the mesmerising euphoria when Jamaicans win," Rodney explained. "We were pretty sure that the connectivity between reggae and track and field would be explosive," he added. "After Anthony returned from Boys and Girls' Champs, we knew this had to be done."

Black, Gold and Green was recorded on April 8 and co-produced by Ancil Cox and Elvis Downer. Significantly, it was engineered by Phillip Smart, the man behind many of Shaggy's hit songs.

While Elvis D and Lushy Ranks are known mainly to the West Indian community in New York City, the London-born Hylton is the biggest name involved with the project.

A former model and Air Jamaica flight attendant, Hylton had a few chart successes in Jamaica during the late 1970s and early 1980s. Her most popular song was the Sly and Robbie-produced Bed's Too Big Without You, which was originally done by The Police.

Team Jamaica Bickle was formed in New York City in 1994. Its primary objective is to provide nutrition to Jamaican athletes who compete annually at the Penn Relays.

It also funds scholarships for students at the G.C. Foster College in Spanish Town and Jamaicans attending college in the United States.