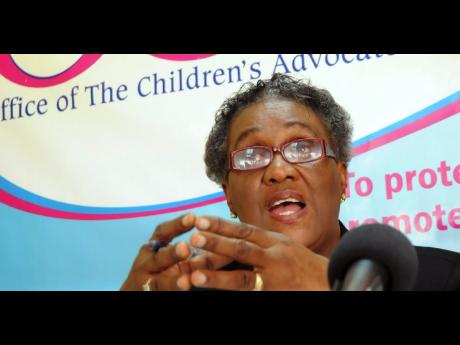 Children's Advocate Mary Clarke has reiterated her call for the revocation of the spirit licences held by bars and clubs that sell liquor to minors.

A Sunday Gleaner investigation, staged last week with the aid of seven students from three Corporate Area high schools, tested two supermarkets, a sports bar, a convenience store, a corner shop and a bar. Without reservation, all of them sold alcoholic beverages - from vodka to beer, stout and wine - to the minors.

Dr Ellen Campbell-Grizzle, director of information and research at the National Council on Drug Abuse (NCDA), told The Sunday Gleaner that the authorities need to enforce the laws governing the sale of alcohol to underage persons.

"Vendors are not asking the age of the children before they sell to them, and that is a challenge, because the law does require it, but they are not doing so in most cases ... ," she said.

Campbell-Grizzle implored vendors to institute the practice of asking for identification cards, arguing that "all sectors of the society need to come on-board the fight" against alcohol abuse among the nation's children.

Clarke said that the 2007-2008 and 2008-2009 annual reports published by the Office of the Children's Advocate (OCA) recommended that spirit licences of vendors who sold alcoholic beverages to minors be revoked.

"It should be mandatory for all relevant establishments and public functions to display notices forbidding children underage to be served intoxicating liquor or alcohol," Clarke said.

"Where there is a failure to comply, and intoxicating liquor or tobacco is sold to minors, there should be the sanction of the withdrawal of the respective licences," Clarke reiterated.

"I'd like to add that none of these recommendations was discussed when I went to Parliament on two occasions," said a crestfallen Clarke.

Only one cashier, from General Food Supermarket in Liguanea, chided 15-year-old Jovan McCookduring his attempt to purchase two bottles of Smirnoff Ice.

The cashier spotted him before he reached the cash register and made it abundantly clear that it was illegal for him to make the purchase. Jovan insisted that he had purchased it at other locations.

She said that those establishments should be closed down. The exchange continued for a short while.

However, after Jovan applied his teenage wiles, the cashier succumbed and allowed him to make the purchase. At the time of the purchase, Jovan was wearing his khaki uniform and school tie and he was accompanied by 16-year-old Kasheka Chen, who was wearing street clothes.

After being told of the purchase, Brandon Chuck, manager of General Food Supermarket, checked his security cameras to confirm that his store had just broken the law.

"Our policy is not to sell (alcohol to minors)," he said after viewing the tapes. Chuck said General Food does not want to be part of the problem but of the solution. For future purchases, any person under the age of 30 would need to present proper identification, said Chuck.

This would make General Food unique, because no other locations visited by our news team took a single reasonable step to ensure that the minors, some of whom were decked in street clothes, were the legal minimum age required to purchase alcohol.

Permission for the teens' participation was received from their schools and parents.

(a) no intoxicating liquor or tobacco product is sold or products served by the establishment to any child;

(b) no child is employed by the establishment to sell or assist in the selling of intoxicating liquor or tobacco products.

(2) A person commits an offence if that person -

(b) employs a child to sell or assist in selling intoxicating liquor or tobacco products; or

(c) purchases intoxicating liquor or tobacco products from a child: Provided that no person shall be guilty of an offence under this section if he proves to the satisfaction of the court that at the time of the sale, or purchase in the case of paragraph (c), he took all reasonable steps to ascertain, and reasonably believed, that the person employed, or the person to or by whom the intoxicating liquor or tobacco product was sold or served, as the case may require, was not a child.

Every holder of a licence under this act who -

(a) knowingly employs any person under the age of eighteen years to sell or assist in the selling of spirits in any licensed premises; or

(b) serves or permits to be served or sold to any person under the age of eighteen years any alcoholic liquor; or

(c) serves or permits to be served with alcoholic liquor, whether on payment therefor or not, any police constable while on duty or any person in charge of any public vehicle while on duty, shall be guilty of an offence and on summary conviction shall be liable to a penalty not exceeding one hundred thousand dollars or imprisonment for a term not exceeding three months, or both such fine and imprisonment.

Any employee or assistant of a licence holder who does any of the acts mentioned in paragraphs (b) and (c) shall also be guilty of an offence and on summary conviction be liable to a penalty not exceeding one hundred thousand dollars or imprisonment for a term not exceeding three months, or both such fine and imprisonment.