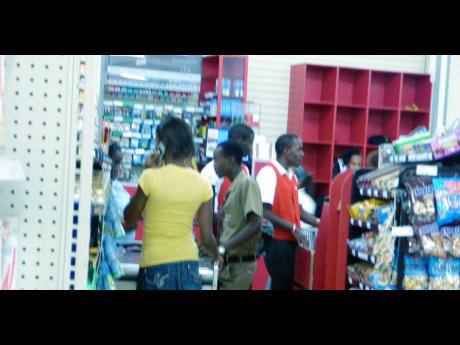 Schoolchildren who participated in The Sunday Gleaner's survey buying alchoholic beverages at a convenience store in Kingston. - Photo by Mark Beckford

FOR SEVERAL years, alcohol abuse among minors has been a major problem in Jamaica.

The latest national school survey, done in 2006 by the National Council on Drug Abuse (NCDA), shows that alcohol remained the most abused substance among students in Jamaica.

A staggering 70.4 per cent of the more than 4,500 students surveyed admitted to imbibing alcohol.

The report also noted that alcohol had attracted the highest per cent of new users "within the last 30 days".

In addition, the national school survey stated that "aggressive advertising in the alcohol market linked to frequent promotions and societal acceptance may contribute to such increases".

It also called for a public-education campaign designed to demoralise and deglamourise alcohol drinking.

Seven years ago, the 2003 National School Survey Report painted an equally uncomplimentary picture of alcohol abuse among children. And, it seems not much has changed.

The survey noted that 30 per cent of the students had their first 'dance' with alcohol when they reached 12-13 years of age.

Similar results were recorded in the 2005 Jamaica Youth Risk and Resiliency Behaviour Survey. This is a school-based study on risk and resiliency behaviour of 10-15-year-olds.

This report also highlighted the prevalence of alcohol use among children.

"In Jamaica, lifestyle habits such as smoking, alcohol consumption, among others, have been identified as risk factors for violence, aggression and inappropriate sexual behaviours," read another section of the risk and resilience behaviour survey.

Dr Ellen Campbell-Grizzle, director of information and research at the National Council on Drug Abuse (NCDA), believes the nation should take seriously the number of its children abusing alcohol.

Reasoning from the results of the 2006 survey, Campbell-Grizzle said curiosity, experimentation, glamorisation of the use of alcohol, as well as promotion and advertising were some of the reasons the students gave for imbibing.

"It is a socially acceptable form of recreation," said Campbell-Grizzle, who pointed out that these factors were compounded by the ease of buying alcohol.

She argued that even though alcohol is not deemed a gateway substance to harder drugs, it is "part of a complex of drug use that is worrying".

In the meantime, the Office of the Children's Registry has reported that between 2007 and 2009, it received 172 reports of substance abuse, covering alcohol, cigarettes and marijuana. The registry received 44 reports up to the end of March this year.