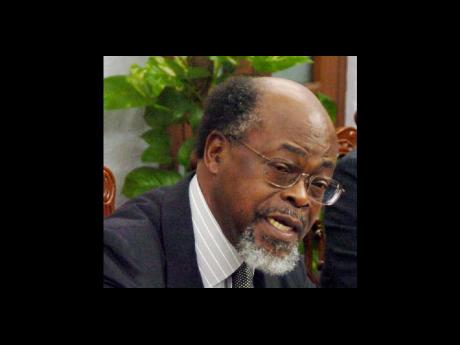 THE OFFICE of the Public Defender is facing a staggering backlog of cases numbering in the hundreds.

This has been compounded by the increasing number of persons seeking the assistance of that office, which is marking its 10th year.

Public Defender Earl Witter told The Sunday Gleaner that since the start of this year, 255 new complaints had been received by his office.

Only 18 of that number have been closed.

But there are many other cases from previous years, which has added to the workload of Witter's office.

The total number of outstanding cases to date is just under 1,500.

After undertaking what appears to be a comprehensive house-cleaning exercise, Witter appears confident that the challenges will be increasingly manageable.

"I see the day coming when I will have to make out a case for additional staff so the backlog can be dealt with," said Witter.

"I am pretty certain that I will be making out the case."

Last year, Witter's office received 846 cases, but at the end of the year, 687 were still unresolved.

Four hundred and sixty-nine of those cases were closed by the end of the year.

According to Witter, his office had been handicapped by shoddy work from investigators.

He was at pains to stress, however, that he was highly appreciative of past public defenders, as well as staff members who survived what he characterised as a rebellion in his office.

"I am pleased with the staff members who have remained with me," he declared.

With the "obstacles" now out of the way, Witter said the primary objective of his office is to improve the current 18 per cent closure rate.

"We acknowledge that this is not good enough," Witter asserted. "The strategic plan of this office for the period 2010-13 is to address this challenge."

Witter suggested that with the major staff challenges now out of the way, the way is clear for progress.

"This was a function of significant staff retrenchment necessitated by gymnastic resistance to reaculturation, as well as my insistence on thorough investigations."

Witter said while he makes no criticism of the way investigations were conducted prior to his appointment, he was able to speak to culture that he inherited.

"I found that there were investigators with eyes keener on the statistics than on the investigation, and hence on the quality of service delivery," the public defender said.

Witter told The Sunday Gleaner that he refused to close files unless he was satisfied that the investigations were thorough.

"There was just too much scratching of the surface," he complained. "That is what led to the perception that nothing comes out of investigations."

This, he said, led to a stand-off with the staff members.

"I was confronted by arrogance, malaise and indolence that I found intolerable and had to be eradicated," he declared.

According to Witter, he refused to put up with "many a weary travellers who ventured to our door as a place of last resort".

In tidying up the system, the public defender said he restructured the contractual arrangements with staff members.

At the end of the two-year contract period, many of the staff members' tenure was not renewed.

Witter disclosed that he now has in place an almost new team of secretaries, investigators and registrars.

The public defender was given additional jurisdiction to investigate circumstances in which it is alleged that a person's constitutional rights have been violated.

Accordingly, the office is mandated, in accordance with the principles of natural justice and the Jamaican Constitution, to investigate complaints brought by members of the State, and to seek redress for constitutional and administrative injustice.

It is required to provide, where necessary and possible, the attorney fees needed to pursue constitutional remedies in court.