Choosing and moving in 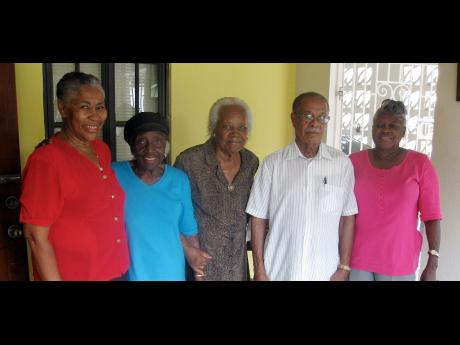 Moving into Harbour View was not only a major step for the new homeowners; it was also a matter of making a new community out of a collection of dwellings.

The five original 'Harbour Viewites' The Sunday Gleaner spoke with had different stories to tell about buying the parcel of land they have made home for 50 years.

Victor Thompson did not choose his lot (there were lot numbers before street names and these still appear on property tax bills), while Beryl Urquahart says her husband was adamant that they did not want a corner lot, which would attract people who just wanted to hang out.

Joy Roberts adds that most of the corner lots were owned by Chinese people.

Ivy Hamilton had a scare. At first, she had her heart set on Pembroke Hall, in Kingston 20, but changed to Harbour View when she heard that the houses were being built.

She applied and was given a Monday date to choose a lot. The preceding Friday, she went to Coronation Market and: "I heard people all around me talking about it. They said you can't find space to put a pin (to select a lot) at the office."

She was confident in the authority of her letter, but when she went to the office on Monday, all the lots had been taken.

"They said they don't know what will happen. About two weeks later, the same man said you can come again, because half the people (who had selected Harbour View lots) did not qualify." She did not want a corner lot either.

Mercella Vassell had not heard about Harbour View at all, but the headmaster at the school where she taught called her and said, "I have five children, you have five children." He had selected a lot, but had found somewhere else.

After enquiring if there was enough money to acquire the house and getting confirmation: "He handed me the papers. When I came, there were three lots left."

Urquahart says initially, there were negative comments about Harbour View, and Thompson accedes that "it look like fowl coop at first when it was just the frame".

However, a model house was completed and furnished on what is now Reel Avenue, and that changed the perception tremendously.

Joy Roberts had been on her way to look at Pembroke Hall when it started raining and she could not pass a bridge. Not only that, a friend announced, "Yuh mad! Pembroke Hall wash out!" So Harbour View it was.

Roberts laughs as she says before moving into Harbour View many of the new homeowners did not have much furniture, as they were leaving smaller spaces. So there was an echo in the house, with not much to absorb the sound.

Then, "My husband made our first TV, but we had no sound. But our neighbour had got a TV and she opened the window wide, so we watched our TV and listened to hers."

There was another spin-off from the space as well. Roberts says that her son 'Ricky' was creeping when he was taken to the house.

"He looked around and it was like 'space!'. He held on to the wall and walked. The first day we ever came to Harbour View Ricky walked. But I will always remember the echo," she said.

With the new houses all looking alike, there were mix-ups. Hamilton says, "One night, my cousin and I were in the kitchen and I see a man come in with a bunch of banana. I said, 'Where you going?'. Him say, 'Wait, is not here I live?'"

Thompson declares that he could not miss his house, as he went to the site every day and watched it go up from the foundation to completion.

When Harbour View was built, the area had absolutely no plants ("not even one tree") and the houses did not have fences.

The heat was definitely on and Thompson remembers using roof compound on the slab roof to help cool the house down.

And Roberts says, "The first thing we did was plant trees." Plus, the water was coming from a well and, as it was brackish, many persons carried water home from their workplaces in Kingston.

There was some sewerage work after the scheme was finished. Urquahart says the houses were built with soakaway pits and, "it was when they filled up and started giving problems they put in the sewerage system".

Milk, bread and The Gleaner were delivered directly to residents. "If you were not there, they would put it down for you and nobody would trouble it," Vassell said.