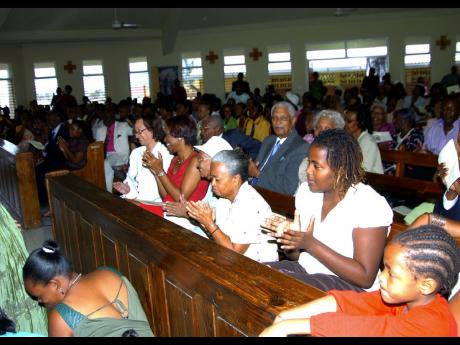 The Harbour View community kicked off its year-long 50th-anniversary celebrations with a service of praise and thanksgiving, held at St Benedict's Roman Catholic Church, Harbour View, on Sunday, February 7. 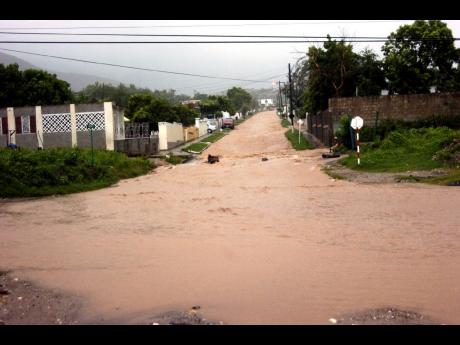 Harbour Drive, a street in Harbour View, was transformed into a waterway after Hurricane Dennis lashed the island on July 7, 2005. In its 50 years, the middle-income development has been affected by many storms and hurricanes. - File photos
1
2

IN 1960, Harbour View was, and in 2010, still is the largest formal housing development on the eastern side of Kingston and St Andrew, along the exit from the Corporate Area to St Thomas. Coming from downtown Kingston along the dual carriageway, the community begins at Harbour Drive, which goes uphill and then down to connect with Fort Nugent Drive - the main road from the roundabout which leads into the community. The road beside the Hope River is aptly named Riverside Drive.

Heading to St Thomas on the main road, the 'Welcome to Harbour View' sign is on the right, past the now-defunct drive-in, about 15 metres and across the road from its 'Welcome to Bull Bay' counterpart. To the hills on that side of the river is Southern Cross Drive, which intersects with Orion just where a road across the hills to Papine should have been built, but did not get very far.

The construction figures provide another set of parameters: Mayer Matalon purchased 364.65 acres; the first of 1,834 houses was built in April 1960 and the last in 1962. But the story of those who moved into Harbour View from the very beginning tells a deeper tale, the dream of home ownership realised, lifelong friendships formed and, after half a century, some work that remains to be done to improve the community.

Beryl Urquahart, president of the Harbour View Citizens' Association, Ivy Hamilton, Mercella Vassall, Victor Thompson and Joy Roberts all bought into Harbour View in 1960. In their experience, there is only one person living in many of the houses now - the children have moved 'uptown' or migrated. But Harbour View certainly was not 'downtown' when it was built and it isn't now, with most homes owner occupied and young professionals buying the properties as they change hands across generations.

Still, Thompson says, "The people who move in are not that neighbourly."

Most of the homes were built as three-bedroom, two-bathroom units, with some two-bedroom, one-and-a-half-bathroom houses as well. Naturally, there has been expansion and upgrading to many homes over time.

There is some variation among the quintet about how much the houses cost originally, a consensus reached on £2,350-£2,500. But they are firm about the mortgage: £17.4.11. When Jamaica switched to its own currency in 1969 and the exchange rate led to a steady rise in the mortgage payment, Thompson says many people tried to pay off. He did and "I live to see people paying double what I stopped paying".